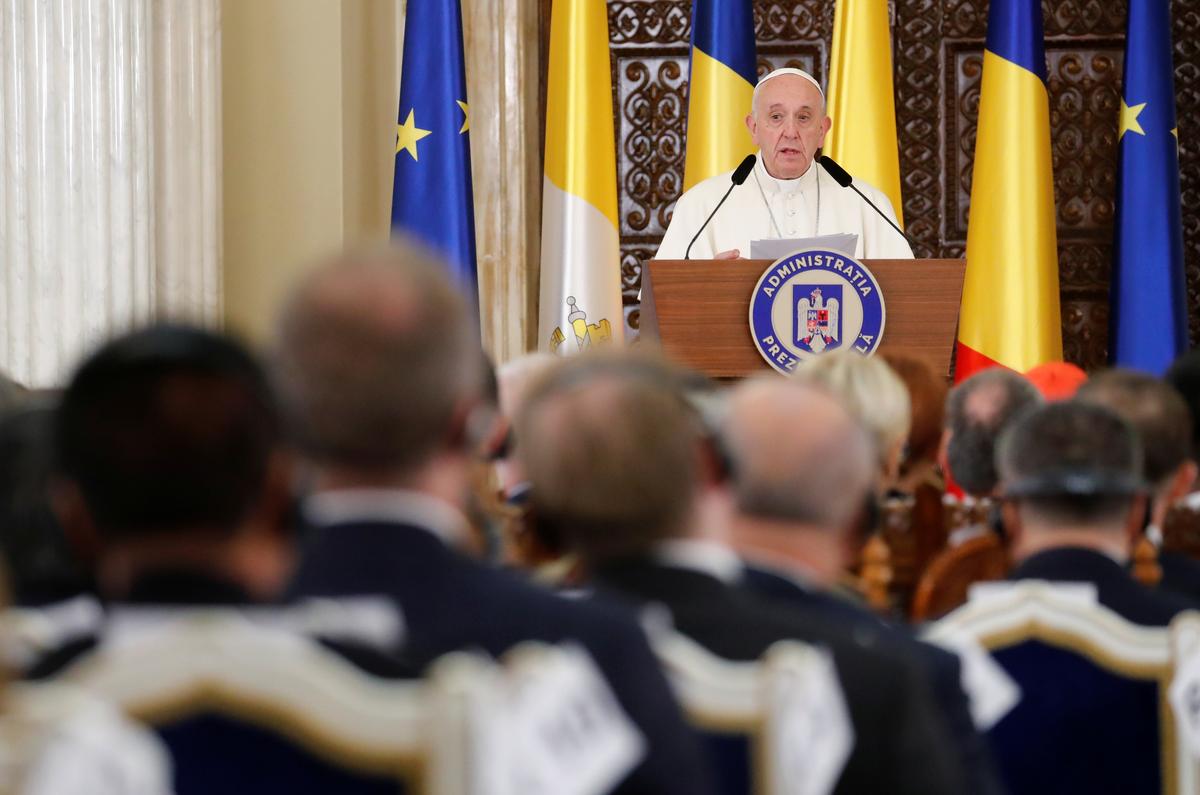 BUCHAREST (Reuters) – Pope Francis urged Romania’s leaders on Friday to shun personal interests and work together for the common good, arriving in the former communist country amid political upheaval caused by a corruption scandal.

Pope Francis delivers a speech during a meeting with authorities, diplomats and civil society at Cotroceni Palace in Bucharest, Romania May 31, 2019. REUTERS/Remo Casilli

Francis arrived to a low-key welcome in the overwhelmingly Orthodox Christian country where Catholics, who suffered persecution in the communist era, make up little more than five percent of the population.

The trip comes just days after the country’s most powerful politician, Liviu Dragnea, was jailed for corruption. The scandal has shaken the stability of the government of Prime Minister Viorica Dancila, a protege of Dragnea.

In a speech at the 19th century presidential palace, Francis praised achievements in the 30 years since the fall of communism but said problems of social stability and governance remained.

“It is necessary to move forward together with conviction in following the highest calling to which every state must aspire: that of responsibility for the common good of its people,” he said.

Romania joined the EU in 2007 but corruption has kept it from admission in the borderless Schengen area and the European Commission has warned the government to clean up its act.

When Pope John Paul visited Romania in 1999, the visit was restricted to the capital Bucharest because that trip was part of a larger Vatican project to mend ties with the Orthodox Church, which split with Rome in the Great Schism of 1054.

But Francis will use planes and helicopters to visit Catholics in the remote region of Moldova, close to the border with the former Soviet satellite, the Republic of Moldova. He will also visit a Catholic shrine in Transylvania, where there is a large ethnic Hungarian population.

One of the main religious purposes of his trip is to beatify seven communist-era bishops of the Eastern Rite Catholic Church who died in prison or as a result of harsh conditions during incarceration. They were declared martyrs this year, putting them on the road to sainthood.

Eastern Rite Catholics worship in a Byzantine rite as Orthodox Christians do. But unlike the Orthodox, they recognize the pope’s authority and remain part of the Catholic Church.

Catholics who refused faced imprisonment or death, and many worshipped underground.

Many Catholic properties taken by the communists or given by the government to the Orthodox Church have yet to be returned 30 years after the fall of dictator Nicolae Ceausescu.

While restitution of properties is still what Vatican spokesman Alessandro Gisotti called “a wound of the past that is still there,” relations are generally good.

Francis later met Romanian Orthodox Church leader, Patriarch Daniel, and in a gesture of respect, kissed a holy medallion worn by the patriarch.

Why Mexico Could Be A Winner As A Result Of The Coronavirus Experience Of The US
Women are disproportionately impacted by coronavirus job losses, costing global economy $1 trillion, says Citi
Tax Attorneys Fight Covid-19 Stay-Home Order In Idaho
What’s Next For Real Estate And Proptech After Covid-19?
George Floyd death: Ex-officer charged with murder in Minneapolis