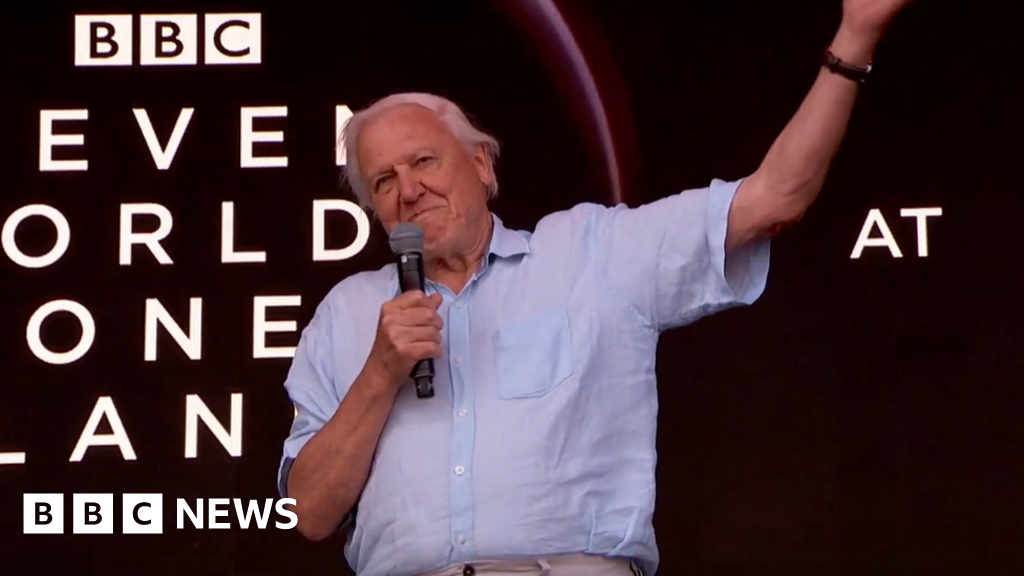 Sir David Attenborough has taken to the stage at Glastonbury to thank festival-goers for cutting their plastic use.

The naturalist appeared shortly before Kylie Minogue’s set, and previewed some of his new TV series Seven Worlds, One Planet, which is due to air on BBC One later this year.

Thousands of people had gathered for his unscheduled appearance.

“That is more than a million bottles of water that have not been drunk by you,” he told the audience to huge cheers.

The presenter appeared to be overwhelmed by the size of the crowd – re-starting his speech twice after he was drowned out by applause.

His speech began with a montage of ocean scenes from the natural history series Blue Planet 2.

“Those extraordinary marvellous sounds you’ve just been listening to were the sounds of the creatures that live in the sea and the great oceans. You may have heard some of them in a series that went out two years ago called Blue Planet 2,” Sir David said

“There was one sequence in Blue Planet 2 which everyone seems to remember. It was one in which we showed what plastic has done to the creatures that live in the ocean. They have an extraordinary effect. And now, this great festival has gone plastic-free. That is more than a million bottles of water that have not been drunk by you at Glastonbury. Thank you. Thank you.

“The oceans cover two-thirds of this planet of ours. Land only covers one-third of the globe.

“We have been making, for the last four years, a series about those things, about those seven very different continents. It starts later on this year. It’s called Seven Worlds, One Planet.

“Here are a few glimpses of what awaits you in the next few months.”

The 93-year-old then played a trailer for the series, featuring a new song, Out There, from Australian singer Sia, and film composer Hans Zimmer.

Protective Practices: Holding Your Own In The Property Management Business
Here’s how much you need to put in a 529 savings plan every month to send your kid to NYU debt-free
High-flying IPOs for Lemonade and Accolade may encourage other unicorns to go public
PPP loans are ending. Here’s where small businesses can turn now
Wells Fargo says it expects to cut dividend in the third quarter to comply with Fed stress test