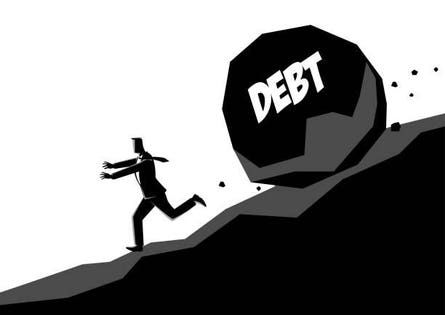 U.S. corporate bond debt continues to grow and protections are getting weaker for high yield bonds.

Non-financial corporate debt in the form of loans and bonds is now about $16 trillion, an equivalent of about 75% of U.S. GDP. This is an over 50% rise since 2007.  Presently about a third of that debt is in the form of leveraged loans, which majority are covenant- and document-lite, and high yield bonds, also known as below investment grade bonds and junk bonds. If the Federal Reserve Bank against cuts interest rates, this will enable companies of every type of company to continue gorging at the debt trough. And unfortunately, we are already seeing investors, particularly mutual funds, increasing their chase for yield and piling into corporate junk bonds.

U.S. Nonfinancial Corporate Debt Is About 75% of GDP

HSBC and Bank for International Settlements

More than ever, investors need to be evaluating their fixed income portfolios.  High-yield issuance slowed in August, but LCD data shows that thus far activity rose about 25% year to year in 2019.  Unfortunately, ominous signals are coming from Moody’s North American Covenant Quality Indicator (CQI). The high yield bonds (CQI) hit its record worst for the second time this year. “The CQI worsened to 4.56 (weakest) in July from 4.49 (weakest) in June and sits 117 basis points weaker than its record best of 3.39 (moderate ↓) in April 2011.” July is the second time in 2019 that the CQI set a record high; in February, the CQI hit 4.53. “But July’s CQI reflects the average score of 73 bonds, more than double the 32 bonds in the February CQI. The CQI is a three-month rolling average covenant quality (CQ) score weighted by each month’s total number of bonds. A higher score denotes weaker covenant quality on our scale from 1.0 to 5.0. The long-term cumulative average CQ score remains 4.10 (weak ↓).

As the CQI worsened, spreads narrowed. The implications for financial regulators and high yield bond investors, including banks who holds these bonds both in available for sale and hold to maturity portfolios, are important, because “The trend of spreads and CQ scores moving together remains intact and suggests that investors are not being compensated for covenant risk.”

CQI is worsening and spreads are narrowing.

Lower-rated bonds are showing unprecedented flexibility. According to the Moody’s report, “Of the full-package bonds in the July CQI that are rated B1 and below, 85% carry a CQ score of 4.00 or surpassing the previous high of 77% in August 2015. July is only the sixth time that the 70% threshold has been hit since we started tracking in 2011. The long-term average is 42%. Single B and Caa/Ca-rated bonds in the July CQI averaged CQ scores of 4.42 and 4.22, respectively, marking only the fifth time (though third in 2019) where all three rating categories averaged a weakest-level CQ score. The 4.42 average CQ score for single B-rated bonds is a record high.”

Junk bonds are issued by every type of sector of the economy including automotive, business services, communications, consumer, energy, healthcare, media, pharmaceuticals, and retail. According to Moody’s analyst Evan Friedman “Business and consumer services bonds offer protections significantly weaker than the North American average. Our sample of 87 bonds issued by North American business and consumer services companies from January 2011 through December 2018 averaged a covenant quality (CQ) score of 4.28 (weakest), far worse than the North American non-financial corporate average of 4.08 (weak ↓).”

Moody’s analysts found that private equity’s large presence in the business and consumer services sectors influences the weaker covenant quality, since private equity professionals negotiate for weak covenant packages for low rated bonds. “Of the consumer services bonds in our sample, 45% were Caa/Ca-rated at time of issuance and all but one is PE-sponsored. At 24%, the percentage of Caa/Ca rated business services bonds also exceeds the North American average of 19%, but by a lesser margin. Every one of the Caa/Ca-rated business services bonds is PE-sponsored.”

Market participants’ fears about slowing economies in Brazil, China, Europe, U.K. and the U.S., are being reflected in inverted yield curves in the U.S. and the U.K. and negative rates in Germany. When we hit the impending global recession, ordinary people will end up losing their jobs as leveraged companies with weak ratings try to keep up with debt payment, but eventually there will be many defaults. Below investment grade bonds are held by thousands of asset managers, banks, hedge funds, insurance companies, pension funds, and sovereign wealth funds all over the world.  Not only will financial investors be hurt by these defaults, but so will ordinary investors like you and I.

Heirloom plants: Saving the nation’s seeds from extinction
White House predicts 100,000 to 240,000 will die in US from coronavirus
‘We like these prices’ — Morgan Stanley’s Mike Wilson sees best ‘risk-reward’ market in 2 years
Coronavirus: Things will get worse, PM warns in letter to Britons
One.com acquires Hostnet as hosting providers continue consolidation in Europe