General Electric shares fell more than 11% Thursday after Madoff whistleblower Harry Markopolos targeted the conglomerate in a new report, accusing it of issuing fraudulent financial statements to hide the extent of its problems.

A website has been set up to disseminate the report, www.GEfraud.com, where Markopolos calls it “a bigger fraud than Enron.” The financial investigator, who was probing GE for an unidentified hedge fund, writes that after more than a year of research he has discovered “an Enronesque business approach that has left GE on the verge of insolvency.”

“My team has spent the past 7 months analyzing GE’s accounting and we believe the $38 Billion in fraud we’ve come across is merely the tip of the iceberg,” Markopolos said in the 175-page report. Markopolos alleges that GE has a “long history” of accounting fraud, dating to as early as 1995, when it was run by Jack Welch.

One area of Markopolos’ case focuses on GE’s long-term care insurance unit, for which the company had to boost reserves by $15 billion last year. By examining the filings of GE’s counterparties in this business, he alleges that GE is hiding massive losses that will only increase as policyholders grow older. He claims that GE has filed false statements to regulators on the unit. Separately, he goes on to find issues with GE’s accounting on its oil and gas unit Baker Hughes.

“The claims made by Mr. Markopolos are meritless,” GE said in a statement. “The Company has never met, spoken to or had contact with Mr. Markopolos, and we are extremely disappointed that an individual with no direct knowledge of GE would choose to make such serious and unsubstantiated claims. GE operates at the highest level of integrity and stands behind its financial reporting. We remain focused on running our businesses every day, following the strategic path we have laid out.”

Markopolos is a Boston-based accounting expert who gained attention after pointing out irregularities with Madoff’s investment strategy, and how it was impossible to generate the returns the fraudster claimed years before the Ponzi scheme was exposed. He was largely ignored at the time. More recently, Markopolos helped uncover a foreign currency trading scandal at a group of banks.

“GE has been running a decades long accounting fraud by only providing top line revenue and bottom line profits for its business units and getting away with leaving out cost of goods sold, SG&A, R&D and corporate overhead allocations,” the report said.

GE’s market value as of Wednesday’s close was $78.8 billion. Markopolos told the paper the insurance unit would need to raise reserves by more than $18.5 billion.

Here are the main points Markopolos makes on the parts of the website, which are now available to read online:

GE is already under investigation by the Justice Department and SEC for potential accounting practices. That includes a $22 billion charge the company took in the third quarter related to acquisitions made in its power business.

The struggling industrial conglomerate abruptly removed its former CEO and chairman John Flannery last year after only a year on the job, and installed former Danaher CEO Lawrence Culp as his successor.

Flannery had been appointed in August 2017, taking the reins from Jeff Immelt as GE’s stock steadily eroded. The company’s value had continued set new lows as investors remain unconvinced by Flannery’s turnaround vision. Last June, GE was kicked out of the Dow Jones Industrial Average. It had been the longest-serving component of the blue chip index at 111 years. 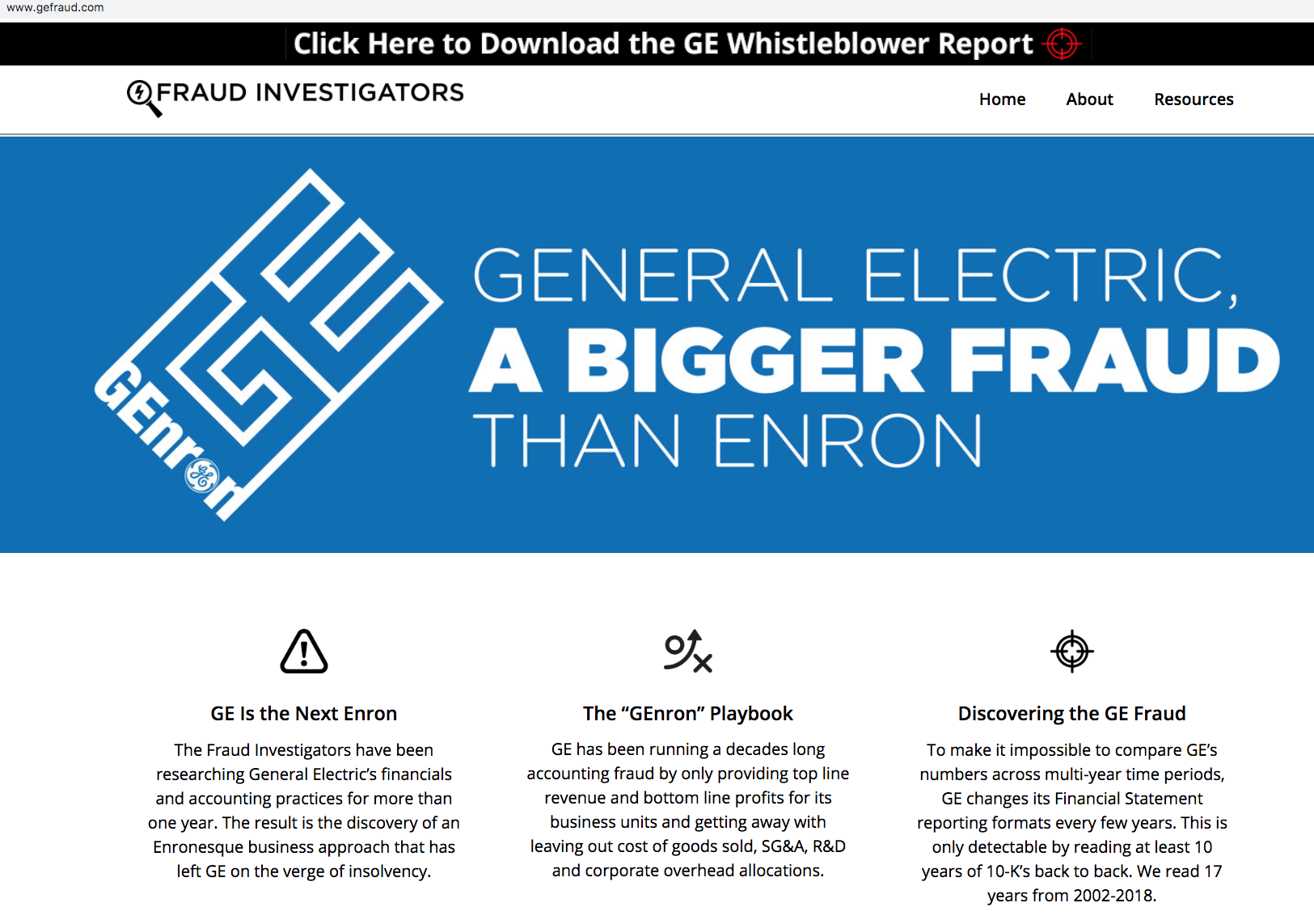 Long-term care policies typically pay for end of life costs, like nursing homes or assisted living. It’s known as one of the more costly and unpredictable parts of the insurance market — especially as the average American lifespan rises. Last January, GE reported a $6.2 billion charge based on liabilities in its long-term care business, which is run by the company’s financial services unit, GE Capital. To make up for the costs, GE Capital said it needed to set aside $15 billion to hold against potential losses, and stopped paying a dividend to its parent company for the “foreseeable future.”

GE pointed out that Markopolos gave an unnamed hedge fund he is working with access to the report ahead of time. Markopolos said he has given the report to securities regulators and that certain information he has uncovered has been given to law enforcement only, and is not in the public report.

A disclaimer on the website read: “Prior to the initial distribution of this Report on August 15, 2019, the Company entered into an agreement with a third-party entity to review an advanced copy of the Report in exchange for later-provided compensation. That compensation is based on a percentage of the profits resulting from the third-party entity’s positions in the securities, derivatives, and other financial instruments of, and/or relating to, General Electric Company (“GE”) (NYSE: GE). Those positions taken by the third-party entity are designed to generate profits should the price of GE securities decrease.”

GE reported better-than-expected second-quarter earnings and gave an upbeat outlook for its industrial cash flow — a key metric watched by investors. GE also announced that long-time executive Jamie Miller, who has been with GE since 2008, was stepping down. She was appointed as CFO in 2017 under Flannery.

GE said its power unit is showing “signs of stabilization” but the segment’s orders remained sluggish, with $4.9 billion in booked orders, representing a drop of 22% from a year earlier. Revenue fell by 25% year over year in the second quarter, while power barely reported a profit of $100 million.

Here is the full GE statement to CNBC:

“We have never met, spoken to or had contact with this person. While we can’t comment on the detailed content of a report that we haven’t seen, the allegations we have heard are entirely false and misleading.

It’s widely known and the WSJ has previously reported that he works for and is compensated by unnamed hedge funds. Such funds are usually financially motivated to try to generate short selling in a company’s stock to create unnecessary volatility.

GE stands behind its financials. We operate to the highest-level of integrity in our financial reporting and we have clearly laid out our financial obligations in great detail.

We remain focused on running our business every day and following the strategic path we have laid out. We will not be distracted by this type of meritless, misguided and self-serving speculation and neither should anyone in the investor community. “

GE Insurance: We believe that our current reserves are well-supported for our portfolio characteristics, and we undertake rigorous reserve adequacy testing every year. The future implementation of the GAAP insurance accounting standard, which will be highly dependent on a number of variables, will not affect statutory accounting, which drives our funding requirements.

BHGE accounting: As a majority shareholder of BHGE, we are required to report consolidated earnings (under U.S. GAAP law), contrary to what Mr. Markopolos alleges. Further, consolidation of BHGE by GE includes additional disclosure of BHGE’s results made through BHGE segment results reporting in the notes to GE’s consolidated financial statements. BHGE is also a stand-alone SEC registrant with its own separate SEC filings under Form 10-Q and 10-K as a separate company. In the most recent 10Q, GE disclosed the loss upon deconsolidation of BHGE from a sale of our interest (taking us below our current majority position) would be approximately $7.4B as of 7/26/19.

GE’s liquidity: Contrary to Mr. Markopolos’s allegations, GE continues to maintain a strong liquidity position, committed credit lines, and several executable options to monetize assets. The Company ended the second quarter with $16.9B of Industrial Cash excluding Baker Hughes GE, $12.5B of liquidity at GE Capital and access to $35B of credit facilities. As it relates to GE’s leverage targets, as the Company has previously stated during 2Q earnings, it expects to make significant progress towards these goals by the end of 2020.

Stock market live updates: Dow’s worst first quarter ever, S&P 500’s worst month since ’08
Robinhood’s offer to traders impacted by outage comes with a catch: No lawsuits allowed
Inherited an IRA? You can skip your distribution for 2020
UK start-ups call for emergency support to help them survive coronavirus crisis
Coronavirus: US overtakes China with most cases