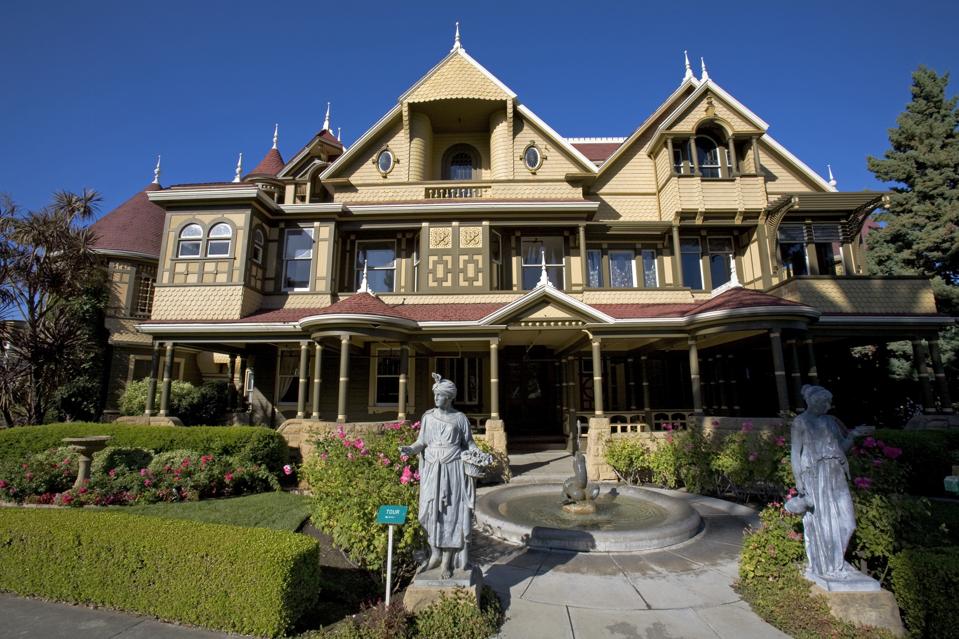 After her husband died in 1881, Sarah Lockwood Pardee Winchester was one of the wealthiest people in the United States. She inherited more than $20.5 million, equivalent to $532 million in 2018, as well as 50% of the Winchester Repeating Arms Company, which gave her an income of roughly $1,000 per day.

But she was deeply depressed; along with her husband, she had lost an infant daughter to illness. Upon the advice of a medium, Winchester moved west from New Haven, Connecticut and, in 1884, she purchased an unfinished farmhouse in the Santa Clara Valley and began building what is now known as the Winchester Mystery House of San Jose, California.

She did not use an architect, and added on to the building in a haphazard fashion until it measured seven stories. There are about 161 rooms, including 40 bedrooms and 2 ballrooms, one completed and one unfinished. The number thirteen and spider web motifs, which carried spiritual significance for Sarah Winchester, occur throughout the house. The chaotic construction led to numerous oddities, including doors and stairs that go nowhere, windows that overlook other rooms and stairs with odd-sized risers. Many accounts attribute these oddities to Sarah Winchester’s belief in ghosts. Environmental psychologists have theorized that the odd layout itself contributes to the feeling that the house is haunted today.

Today, the Winchester Mystery House is a popular tourist attraction, said to be haunted by the ghosts of those killed with Winchester rifles.

For a different kind of haunting, visit Bodie State Park in the Sierra Nevada Mountains of eastern California. Upon the discovery of a profitable line of gold in 1876, Bodie became a boomtown and, by 1879, had a population of 5,000–7,000. The town subsequently went into decline and, by 1915, was called a “ghost town.”

The climate in the area is extremely dry, which has preserved over 100 buildings in a state of arrested decay. They draw over 200,000 visitors a year, many of them claiming that the place is haunted by the ghosts of miners. It is certainly eerie, desolate and atmospheric.

If any community is haunted, surely it is Salem, Massachusetts. The city that saw a horrific miscarriage of justice in 1692 has capitalized on its grisly history, calling itself the “Witch City.” If you visit Salem, you can tour any number of places said to be haunted, and you can tour ancient graveyards by candlelight. Around Halloween, the streets of Salem are jammed with costumed revelers and ghost hunters. Among them are surely modern witches, warlocks and vengeful spirits that will not rest.

Sleepy Hollow, New York used to be called North Tarrytown, but in 1996 the village officially adopted the name given by Washington Irving in “The Legend of Sleepy Hollow.” The short story about the local area and its infamous specter, the Headless Horseman, has given Sleepy Hollow a reputation as one of the most haunted places in the world. The town goes all out in October with The Great Jack O’Lantern Blaze, Headless Horseman tours and guided tours of Sleepy Hollow Cemetery. To explore the origin of the story, visit Sunnyside, the home of Washington Irving.

Trump doesn’t wear coronavirus mask in public at Ford plant
WHO pauses trial of hydroxychloroquine as coronavirus treatment amid safety concerns
What’s Next For Real Estate And Proptech After Covid-19?
Are businesses in danger of coronavirus lawsuits as they reopen?
4 tips for turning your home into a productive work space, according to tidying expert Marie Kondo