Shares of Netflix surged 8% in premarket trading after the company late Wednesday released its earnings report for the third quarter. The company reported mixed results, with an earnings beat and a miss on domestic subscriber adds, while revenue slightly missed analysts’ expectations.

Here are the results vs. expectations: 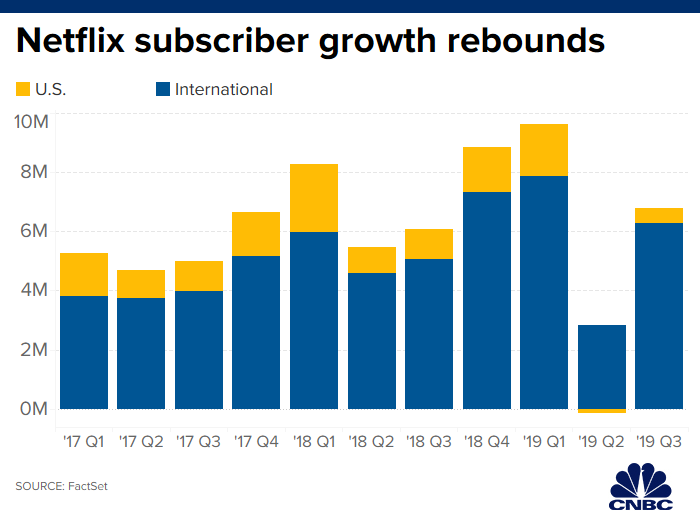 In its letter to shareholders, Netflix addressed the onslaught of new streaming services that are set to arrive later this year, including Disney‘s Disney+ and Apple‘s Apple TV+, as well as NBCUniversal’s Peacock and WarnerMedia’s HBO Max. The company warned the launch of these new services will be “noisy” and it could generate “modest headwinds” in the near term.

“Many are focused on the ‘streaming wars,’ but we’ve been competing with streamers (Amazon, YouTube, Hulu) as well as linear TV for over a decade,” the company said. “The upcoming arrival of services like Disney+, Apple TV+, HBO Max, and Peacock is increased competition, but we are all small compared to linear TV. While the new competitors have some great titles (especially catalog titles), none have the variety, diversity and quality of new original programming that we are producing around the world.”

CEO Reed Hastings downplayed the threat of the new streaming services, saying on the company’s earnings call that, ultimately, they don’t represent a “big change” in the competitive landscape. Instead, he said linear TV providers continue to represent Netflix’s biggest rival.

“We’re all relatively small compared to linear TV,” Hastings said. “So we’re not really competing with each other, but with broadcast.”

Netflix also touched on its content strategy as the streaming wars continue to heat up, saying it’s not afraid to take “bold swings” when necessary, but that it won’t “chase every deal on the table.” The company said its multi-billion-dollar content budget and robust subscriber base allow it to pursue a variety of different projects.

Much of the excitement around Disney+ has centered on its massive library, which includes Pixar movies, Marvel movies and decades of classic films. Despite the threat of Disney’s powerful franchises, Netflix said it still plans to focus on the value of its own shows and brand, as evidenced by the popularity of several recent original programs.

“I think that is every bit as valuable as drafting off a bunch of different franchises and waiting for them to burn out,” Chief Content Officer Ted Sarandos said on the call.

Even with a bevy of streaming services available, Netflix subscribers are still tuning into original series like “Stranger Things.” The company said the third season of “Stranger Things,” which debuted in July, was the most viewed season yet with 64 million accounts watching it in the first four weeks.

Starting in the fourth quarter, Netflix will break out revenue and membership numbers into several regions, including Asia Pacific, Europe, Middle East and Africa, Latin America and the US and Canada.

Disclosure: NBC is part of NBCUniversal, the parent company of CNBC.

TPC Estimates The HEROES Act Would Substantially Cut Individual Income Taxes
Summer camp: If it’s not outside, what is it worth?
WHO pauses trial of hydroxychloroquine as coronavirus treatment amid safety concerns
Reopening The Economy Won’t Rescue State Budgets Or Stop The Recession
Coronavirus live updates: States lift recreation restrictions ahead of Memorial Day weekend