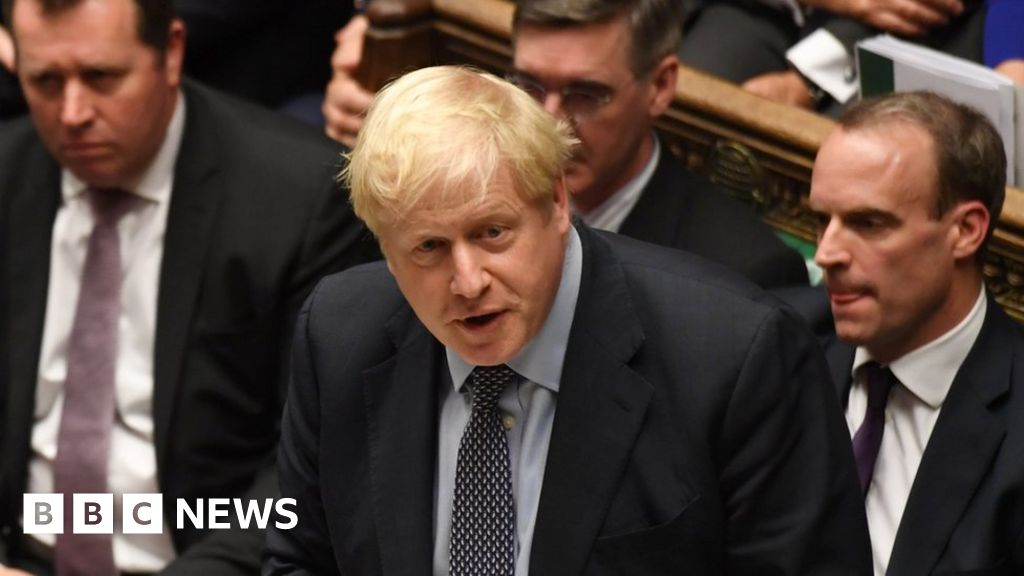 Boris Johnson has sent a request to the EU for a delay to Brexit – but without his signature.

The request was accompanied by a second letter, signed by Mr Johnson, saying he believes a delay would be a mistake.

The PM was required by law to ask the EU for an extension to the 31 October deadline after losing a Commons vote.

EU Council President Donald Tusk tweeted that he had received the extension request and would consult EU leaders “on how to react”.

Opposition MPs have warned the PM that if he tries to circumvent Parliament’s instructions to seek a delay, then he may find himself in the law courts.

Mr Johnson previously said he would “rather be dead in a ditch” than ask the EU to delay Brexit, and the UK would leave on 31 October “do or die”.

Hours after losing a crunch vote in a historic Saturday session in the House of Commons, the prime minister ordered a senior diplomat to send an unsigned photocopy of the request for a delay, which was forced on him by MPs last month.

The second letter from Mr Johnson – signed off this time – makes clear he personally believes a delay would be damaging.

It says the government will press on with efforts to pass the revised Brexit deal agreed with EU leaders last week into law, and that he is confident of doing so by 31 October.

A cover note from Sir Tim Barrow, the UK’s representative in Brussels, explained the first letter complied with the law as agreed by Parliament.

BBC political editor Laura Kuenssberg described the decision to send three documents as “controversial”, predicting “there will be a fight about whether Boris Johnson is trying to circumvent the court”.

“This is heading straight for the court, and it may very quickly end up in the Supreme Court,” she added.

Asked on BBC Breakfast whether the PM’s move was “childish, Conservative Brexiteer MP Nigel Evans said: “Well he was going to be criticised if he didn’t send the letter, because it would have been against the law.”

He added that “it’s not all in our gift”, and that EU leaders may look at both letters and deny the request for a delay.

Earlier, Mr Johnson rang European leaders, including Mr Tusk, to insist that the letter “is Parliament’s letter, not my letter”.

What did the PM say in the letter he signed?

“The UK Permanent Representative will… submit the request mandated by the EU (Withdrawal) (No.2) Act 2019 later today. It is, of course, for the European Council to decide when to consider this request and whether to grant it.

“Although I would have preferred a different result today, the Government will press ahead with ratification and introduce the necessary legislation early next week. I remain confident that we will complete that process by 31 October.

“While it is open to the European Council to accede to the request mandated by Parliament or to offer an alternative extension period, I have made clear since becoming Prime Minister… that a further extension would damage the interests of the UK and our EU partners, and the relationship between us.

“We must bring this process to a conclusion so that we can move to the next phase and build our new relationship on the foundations of our long history as neighbours and friends in this continent.”

Read the letters in full.

At the first Saturday sitting in the Commons for 37 years, MPs voted in favour of an amendment withholding approval of Mr Johnson’s Brexit deal until all the necessary legislation to completed.

Tabled by Tory MP Sir Oliver Letwin, the amendment was intended to ensure that Mr Johnson would comply with the terms of the so-called Benn Act.

Under that act, passed by MPs last month and which required the PM to seek a Brexit extension, Mr Johnson had until 23:00 BST on Saturday to send a letter requesting a delay.

In a letter to MPs and peers on Saturday evening, he said the EU could reject “Parliament’s request for further delay”, adding he “will not negotiate a delay”.

“I will tell the EU what I have told the British public for my 88 days as prime minister: further delay is not a solution,” he said.

“It is quite possible that our friends in the European Union will reject Parliament’s request for a further delay (or not take a decision quickly).”

The Commons defeat marked a major setback for the PM – although Mr Johnson said he was not “daunted or dismayed” and remained committed to taking Britain out by the end of the month with his “excellent deal”.

However, Labour leader Jeremy Corbyn said in a tweet the prime minister had been told to obey the law and “despite his petulant posturing and bluster he finally has – he’s asked for an extension”.

He told a rally in Liverpool that Labour had “answers” for Mr Johnson’s Brexit plan.

Today I told the Prime Minister to obey the law and despite his petulant posturing and bluster he finally has – he’s asked for an extension.

His damaging deal was defeated today.

Anna Soubry, of Change UK, accused the prime minister of acting like a “truculent child”, while Liberal Democrat Christine Jardine MP said Mr Johnson was going against the will of the Commons.

SNP leader at Westminster Ian Blackford said earlier that if Mr Johnson acted as if he was “above the law”, he would find himself in court.

“While he’s sent the legally required letter – that’s quite frankly the only one… the EU leaders will consider legally – if he’s attempting essentially to circumvent or undermine the first one, which he’s required to [send] by law, that’s a very serious matter.”

On the EU side, there has been no official response yet to the contents of the letter, except Mr Tusk confirming he received it.

But the French President, Emmanuel Macron, has already signalled that he believes a new Brexit extension was not good for anyone.

Boris Johnson literally spelling out his opposition to prolonging the Brexit process by writing a separate letter to Brussels to say so, makes it easier for his peers Emmanuel Macron, Angela Merkel and others to drag their feet a little.

They prefer first to look to the prime minister to make good on his promise to them that their newly-negotiated Brexit deal will *definitely* be passed by Parliament.

But, if push comes to shove, with the alternative being no deal at all… I cannot imagine the EU slamming the door in the face of the UK now.

They will want to know what [the extension] is for. Are there plans in the UK to hold a general election, a second referendum or a referendum on the new Brexit deal? Or is a bit more time needed to pass Brexit-related legislation?

He tweeted on Saturday: “Whatever happens next, the marches outside the Parliament show just how important a close EU – UK future relationship is.”

Jacob Rees-Mogg, leader of the Commons, said the government plans to hold a meaningful vote on Monday – although it is not clear if Commons Speaker John Bercow will allow it.

Mr Johnson has also vowed to press ahead with the legislation to implement the deal next week.

Do you have any questions about the latest Brexit developments?

In some cases your question will be published, displaying your name and location as you provide it, unless you state otherwise. Your contact details will never be published. Please ensure you have read the terms and conditions.

Use this form to ask your question:

If you are reading this page and can’t see the form you will need to visit the mobile version of the BBC website to submit your question.

Stocks making the biggest moves in the premarket: McDonald’s, Tesla, JetBlue, Facebook & more
Loop Capital CEO says diversifying his workforce has been easy: ‘I focus on talent’
Town for sale: This old west town in New Zealand can be yours for $7.5 million
U.S. consumer confidence for June jumps more than expected
IRS Confirms It Has No Plans To Extend The Filing Deadline Past July 15