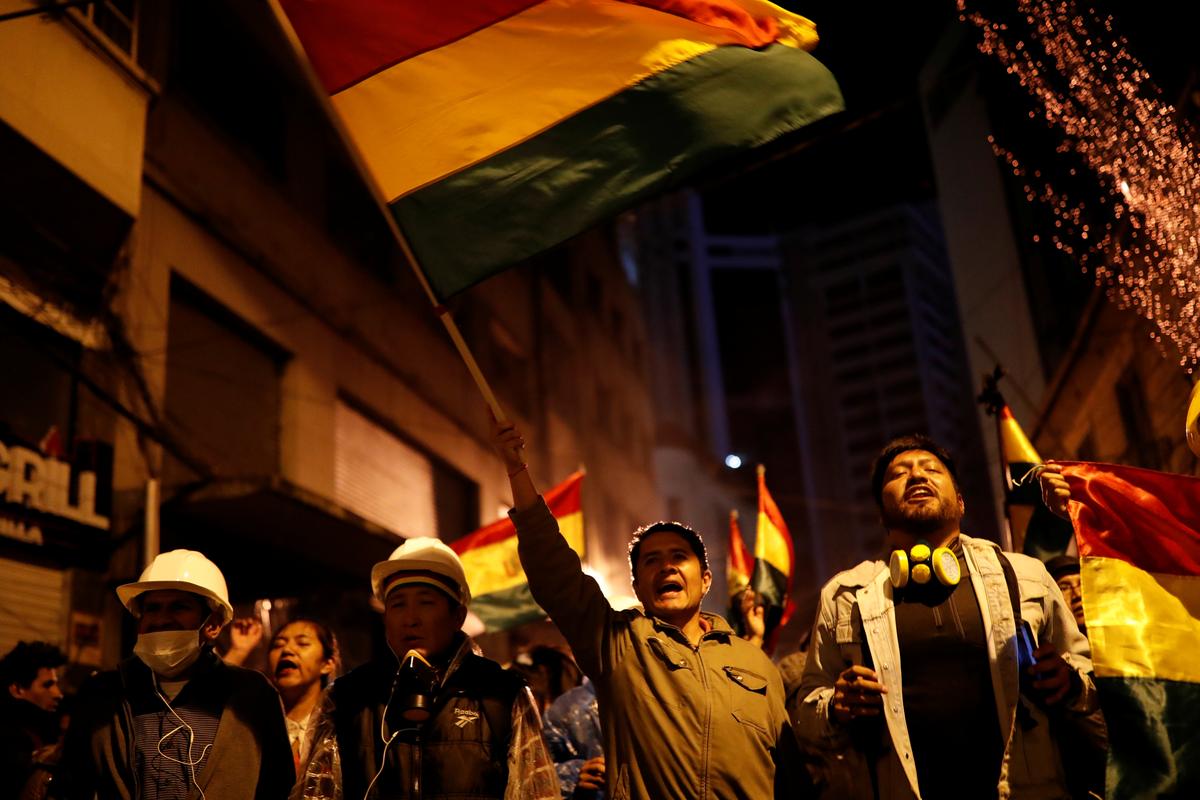 LA PAZ (Reuters) – Bolivians marched again in several cities on Friday night and there were even scattered cases of police joining the protests, adding to the pressure on President Evo Morales amid a weeks-long standoff over a disputed election last month.

In the city of Cochabamba, the scene of recent violent clashes, Reuters witnesses saw police officers protesting on the roof of their headquarters carrying Bolivian flags in an apparent act of disobedience against the government.

Images and footage on local television showed police in other cities also marching alongside protesters and joining chants regularly used by the opposition to leftist leader Morales.

The national commander of the police force and the defense minister denied there was widespread insubordination by police but acknowledged the scattered police actions.

“We trust that the police commander can now get those police who for some reason are doing acts of disobedience to reflect and we are sure the police will continue to fulfill their constitutional job to safeguard the people,” Defense Minister Javier Zabaleta said on state television.

People should remain calm, he said, adding there were no plans to mobilize the military.

The head of the national police said in a statement that forces around the country would fulfill their duties to ensure order and peace.

The South American country has been rattled by protests, strikes and road blocks for almost three weeks since, hurting the landlocked country’s image and economy.

Luis Fernando Camacho, a civic leader from the eastern city of Santa Cruz who has become a symbol of the opposition, appeared at rallies on Thursday and Friday in the capital La Paz, calling for Morales to step down. [nL2N27N1AN]

Late on Friday, Camacho said in a Twitter post police had joined protests in at least five cities: “Thank you for being with your people, God bless you!”

Camacho says he has prewritten a resignation letter that he wants Morales to sign, which he plans to deliver next week.

The government said on Friday that an audit of the contentious presidential election would likely be completed early next week, which could either back Morales’ victory or throw open the door to a new vote.

At the presidential offices in La Paz, Foreign Minister Diego Pary said that the audit by the Organization of American States (OAS) should be ready by Tuesday or Wednesday.

Opposition leader Carlos Mesa asked Congress on Friday to pass an emergency bill to prepare new elections as Morales vowed again not to buckle to mounting pressure to step down.

“The Right says ‘Evo has to resign.’ I want to tell you, sisters and brothers, to all of Bolivia and the world, I will not resign,” Morales, a socialist, said at a public event. “We are elected by the people and we respect the constitution.”