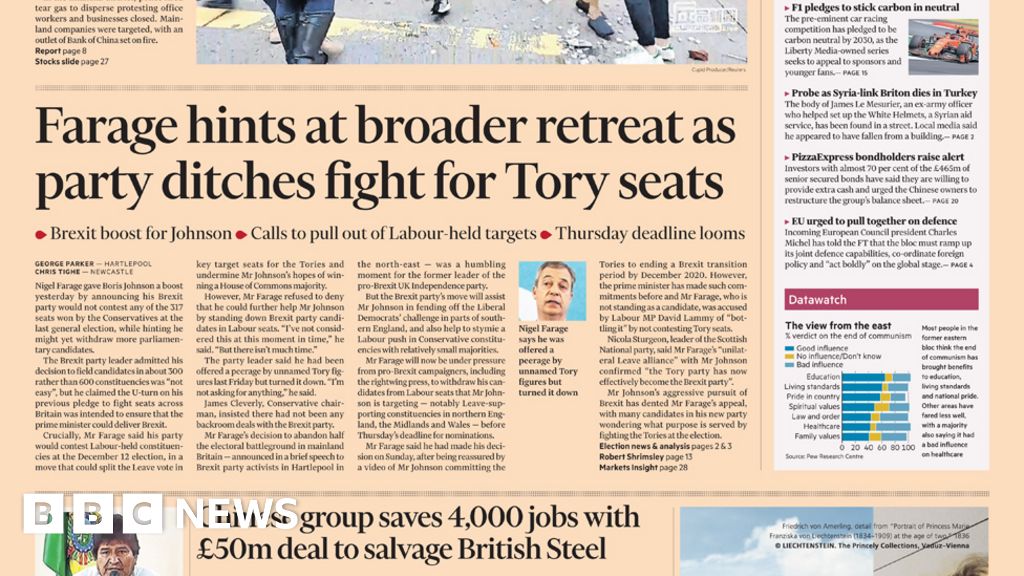 Nigel Farage’s decision to stand his Brexit Party down in more than 300 constituencies at the election dominates the front pages.

“Farage retreats from every Tory seat” is the headline in the Telegraph, adding that bookies have “slashed the odds of a Tory majority” as a result.

The paper suggests Mr Farage now faces a battle to keep control of his party and is under pressure from senior party figures and donors to go further and withdraw candidates from other key marginals.

Writing a column in the paper, Mr Farage says his decision should “kill off the idea of a second referendum”.

Not everyone thinks he’s made the right decision, though. “A disgrace to politics” is how one – now former – Brexit Party candidate describes Mr Farage.

The Sun, the Metro and the i all go with a front page photo of Boris Johnson raising a pint.

“Cheers Nige” says the Sun, adding “now help us beat Labour by pulling out of every seat”.

The Telegraph suggests that might be a possibility. It quotes a “source close to Mr Farage” saying that “there’s no question he could be prepared to do more if he’s treated with courtesy by Conservative Party chairman James Cleverly”.

The source adds that “the Brexit Party would be happy with 10 sitting MPs to help get Brexit done”.

It reports that senior Tories are “pressing behind the scenes” for further concessions, and says Labour, the Lib Dems and the SNP fear that a “secret pact” has been struck between Mr Farage and Mr Johnson in favour of a “hard Brexit” – something that both parties have denied.

“Boris and Farage do Trump deal to stitch up election”, is the Daily Mirror’s take.

It points out that Mr Farage has changed his position following a call by US President Donald Trump for Leavers to team up, and following the offer of a peerage, which Mr Farage says he turned down.

The paper’s editorial says President Trump could be the biggest winner, with Mr Johnson and Mr Farage delivering the NHS and the British food industry into “greedy US hands”.

The Times leads with an exclusive on the HS2 high speed rail project, headlined “HS2 will boost north despite soaring costs”.

The paper says it has seen a leaked copy of an independent review into the project, which recommends that ministers should continue with it despite “ballooning costs”.

It says the report suggests a new budget of £88bn – up from £56bn – will itself need to be revised upwards again.

In its editorial, the Times calls on Boris Johnson to “come off the fence” and give the project his backing.

And finally, the Telegraph says we could be heading for a woke – rather than White – Christmas this year.

It reports that environmental charities are recommending that we switch from Christmas cards to e-cards and rent Christmas trees, which can then be replanted after use.

Other recommendations include using pine cones and holly rather than tinsel and wrapping up presents in scarves.

The Telegraph, though, isn’t impressed. In its editorial, it says the suggestions all miss the point that Christmas is supposed to be a time for treats and fun.

Get news from the BBC in your inbox, each weekday morning