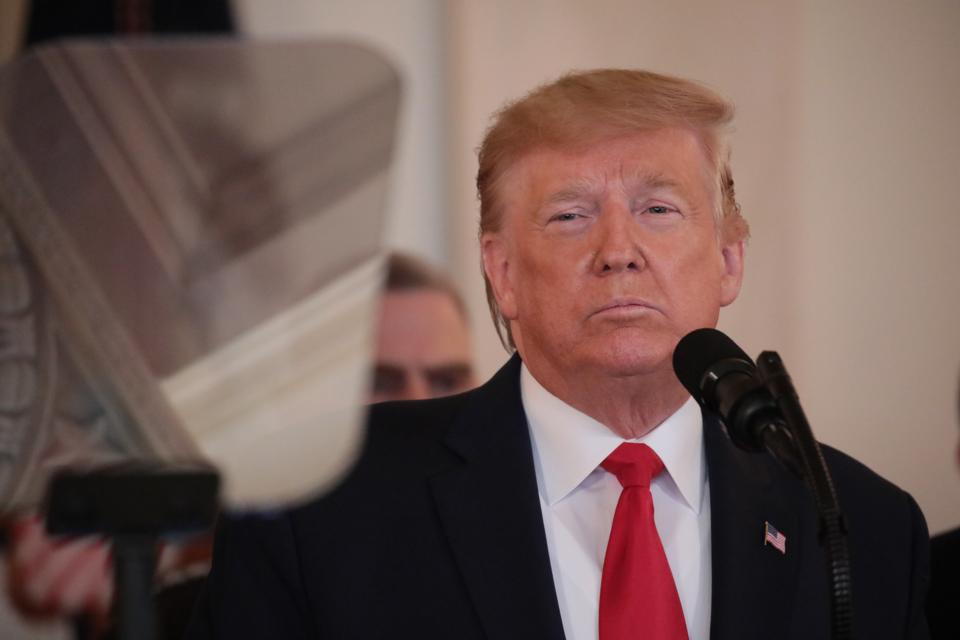 President Trump doesn’t want to release his tax returns. After promising to make them public during his primary campaign, he later changed his mind. And even after winning his race for the White House, he continued to refuse, breaking with four decades of voluntary disclosure by American presidents.

The controversy over Trump’s returns has been heated, with critics (myself included) urging the president to make them public. But let’s be clear: Trump is entirely within his rights to keep those returns secret. The taxpayer information of American presidents is protected from public disclosure, just like the taxpayer information of everyone else who files an income tax return.

Presidents aren’t required to release their returns to anyone — and the IRS is prohibited from even discussing the existence of any individual president’s return. But to say that presidential tax secrecy is legal isn’t the same thing as saying it’s right.

American presidents, when acting in their private capacity as American taxpayers, are basically above the law — at least during their time in office. And because their taxpaying is the focus of broad and consistent public attention, any problem with their behavior poses an existential threat to the popular consent that makes the tax system function.

The United States needs a law mandating presidential tax disclosure — even if it means giving Trump a pass and imposing it only on future chief executives.

Presidents have a dual relationship with the tax system. On one hand, they serve as the nation’s tax collector in chief, supervising the agencies charged with enforcing the tax law. At the same time, however, presidents are themselves taxpayers, subject to the same legal responsibilities as anyone else. In practical terms, this arrangement means that presidents must police their own tax behavior.

In theory, the IRS is keeping tabs on presidents and their taxes. Since 1977, the agency’s internal guidelines have required an annual, automatic audit of returns filed by sitting presidents and vice presidents.

However, numerous questions surround those audits. Are they really conducted every year? Are they rigorous? Do they produce any actionable results?

The agency may be doing a fine and thorough job of holding presidents accountable, but it’s hard to know because the results of those audits are unknown. Audit information, just like all other taxpayer information, is protected from public disclosure.

A Role for Congress

When it comes to presidential audits, Congress seems to be in the dark, too. In seeking access to Trump’s tax returns last year, the House Ways and Means Committee justified its request as a means to evaluate the presidential audit program.

Congress has good reason to be dubious about those audits: The IRS has been known to drop the ball when examining a sitting president’s returns. In 1973 and 1974, after a series of critical news articles and one damaging leak from inside the agency, President Nixon asked the Joint Committee on Internal Revenue Taxation (JCIRT) to examine his returns.

At least some of those returns had already been audited and accepted by the IRS. But in reviewing the returns, the JCIRT found numerous problems — to the tune of roughly half a million dollars in unpaid taxes and interest.

The IRS later acknowledged that its initial audit of Nixon’s returns was something less than rigorous. During Nixon’s impeachment proceedings, the agency described its May 1973 examination of the president’s recent returns as “not an in depth audit.”

(The IRS later conducted a second round of audits under the supervision of a new commissioner, Donald Alexander. Working closely with the JCIRT, the agency found various problems.)

Given the IRS’s past failure, it’s reasonable that Congress might want to take a fresh look at the presidential audit program.

It’s not yet clear whether Ways and Means (or any other congressional committee) will actually get a look at Trump’s returns; the issue is tied up in court. But even if it does, lawmakers still can’t make the president follow the law. As legal scholar Andy Grewal has pointed out, the Constitution grants lawmakers only the power to examine and investigate; they may expose problems with presidential tax compliance, but they have no power to enforce the tax laws — save through impeachment, which is less about punishing specific “high crimes and misdemeanors” and more about judging presidential fitness writ large.

For the sake of argument, let’s assume that the IRS is, in fact, conducting rigorous audits of every sitting president’s tax returns. Let’s further assume that it occasionally finds a serious problem. When that happens, can the agency do anything about it?

To be sure, the IRS can point out the problem. And it can ask the president to correct it. But can it compel such a correction?

Maybe not. According to the Justice Department’s Office of Legal Counsel, sitting presidents can’t be indicted or criminally prosecuted. That opinion has numerous implications for American governance, but in the specific case of tax enforcement, it deprives the IRS of one of its most potent weapons.

The IRS has other tools at its disposal, of course. But the president’s immunity from prosecution (at least for the duration of his time in office) limits its ultimate capacity to enforce the law against a sitting president. And that means presidents can’t be effectively held to account for their tax behavior.

Presidents since Nixon have been aware of this problem, and over the past 40 years they have improvised a solution. All presidents since Jimmy Carter have chosen to voluntarily release tax returns filed while they held office.

Voluntary release has been a big step forward in presidential tax transparency. But ultimately, it’s not adequate to the task.

To begin with, there’s no way to know for certain that the returns released by the White House are the same returns actually filed with the IRS. A president could release one return but have submitted a different one.

Alright, maybe that’s paranoid. But even if we assume some good faith, we still have no idea what happens to returns after they’re filed. Presidents disclose their returns at the moment of filing, but they don’t typically release any changes later made to them, either as a result of an IRS audit or through an amended return.

Voluntary release is also a problem because it’s, well, voluntary. Trump’s refusal to observe the 40-year tradition of presidential tax disclosure is a timely reminder that we can’t rely on voluntarism to protect the integrity of the tax system.

And make no mistake: That’s what’s at stake.

Because the income tax is still self-assessed in many respects, it depends heavily on political and social norms of compliance. These norms are a crucial part of what several scholars (including law professors Lawrence Zelenak and Ajay K. Mehrotra, as well as historian James T. Sparrow) have termed fiscal citizenship: the constellation of reciprocal rights and responsibilities that bind the individual to the state — and the state to the individual.

That’s why Nixon’s public tax scandal was both dangerous and transformative, and why arguments over Trump’s tax behavior are freighted with so much political and legal importance. If presidents shirk the responsibilities of fiscal citizenship (or even appear to), they risk undermining the social norms that make the income tax a functional revenue device.

Of course, the president’s private behavior as a taxpayer isn’t necessarily on public display: If the president is shirking his duties as a taxpayer, it might never come to light, given the privacy protections afforded to all taxpayers; and if secrecy is the law of the land, fiscal citizenship could survive the misbehavior of a lawless taxpayer in chief.

Or at least that’s the theory. In practice, a president’s tax behavior is almost always a subject of public debate and speculation. That hasn’t always been the case; until the 1970s, presidential taxpaying rarely made news. But ever since Nixon, both the media and, more recently, average voters have shown a keen interest in how the president — any president — meets his civic responsibility to the fisc.

Nixon released his tax returns to the public, which inaugurated the modern tradition of voluntary disclosure. But speculation about Nixon’s taxes preceded that release, thanks to a combination of investigative reporting (using publicly available court documents) and illegal leaks from inside the IRS.

Similarly, Trump’s tax behavior has been the subject of intense scrutiny, despite his refusal to release his returns. As during the Nixon episode, that speculation has been driven, at least in part, by some careful, well-sourced reporting. It has also drawn sustenance from a few selective leaks.

My point is this: Presidential tax behavior has a way of finding its way into public debate, regardless of whether a president chooses to release any tax returns.

There Oughta Be a Law

It’s time to dispense with voluntary disclosure. Presidents should be required by law to release any tax returns filed while they hold office. Return disclosure could be added to the requirement, imposed by the Ethics in Government Act of 1978, that presidents file annual reports on their personal finances. Tax returns subject to this new disclosure requirement would be supplied directly by the IRS; any subsequent modifications to those returns would also be disclosed by the agency.

As it happens, legislation pending in Congress would impose a form of that requirement (on presidents, as well as vice presidents, and candidates for both offices) (H.R. 1). Given the bitter controversy over Trump’s returns, however, that legislation stands approximately zero chance of enactment.

But maybe it can be rescued. What if Congress were to limit the requirement to presidents taking office after 2020 (or even 2024)? Tax transparency by Trump is highly desirable — because he’s president, not because he’s Trump.

But ongoing transparency by every president after Trump is even more important. If exempting Trump is the price of permanent reform, then so be it.

Cisco to acquire internet monitoring solution ThousandEyes
College-bound students to miss out on billions in financial aid due to pandemic
What it’s like to fly 3,000 miles across the country in a pandemic
Dental practices consider using UV light tech to safely reopen
Stock futures fall slightly as investors weigh economy reopening and US-China tensions