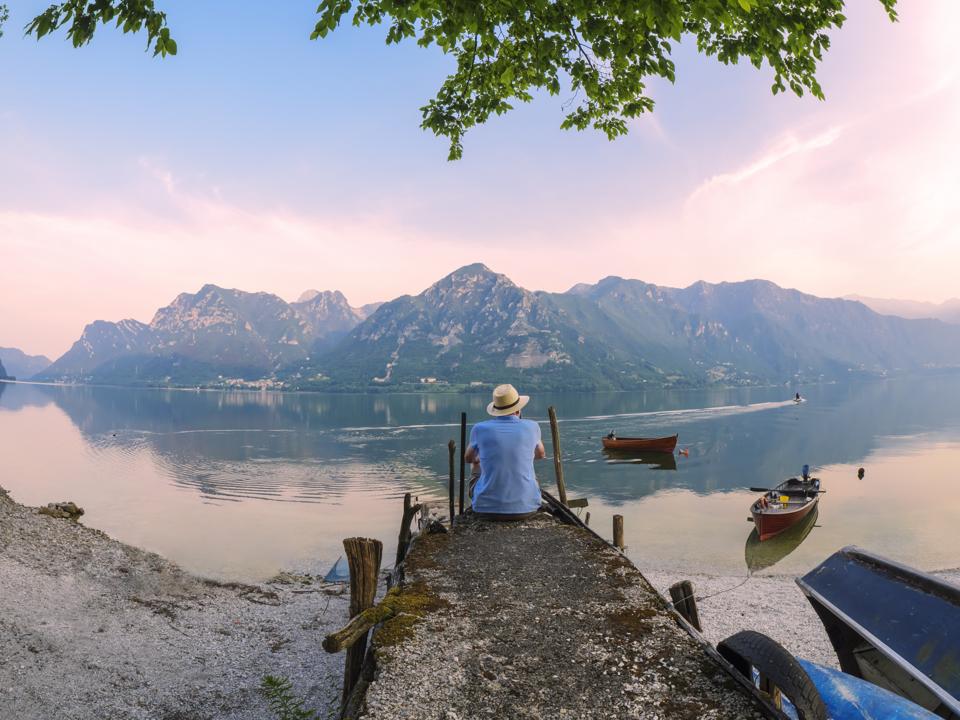 You’re probably familiar with the idea of a work sabbatical: a paid leave, usually from one month to a year, often to study or travel. But what about a soulbbatical?

Never heard that word? It’s OK. Shelley Paxton, author of Soulbbatical: A Corporate Rebel’s Guide to Finding Your Best Life, made it up to describe her own experience, jumping off the corporate treadmill to become what she calls the “Chief Soul Officer” of her life. I recently spoke with Paxton about what a soulbbatical is, who can have one and how to do it (highlights below).

For 26 years, Paxton had a glamorous, successful career, working as a marketing and ad exec at companies like Visa, AOL, McDonald’s and, her last stop, Harley-Davidson, where she spent almost three years as vice president for global marketing and brand.

But while at Harley, Paxton felt a tug. She up and quit at age 46, in 2016, to figure things out. I’ll let her tell you about this and share her advice if you might want to take a soulbbatical, too:

Next Avenue: What is a soulbbatical?

Shelley Paxton: It’s a made-up word; I mashed together soul and sabbatical as I was leaving my job. I wanted people to understand leaving my prestigious role at Harley-Davidson wasn’t a flip decision.

It was a deeper search for self. It was me wanting to have a relationship with my soul and understanding my deepest desires and purpose.

Is it about leaving a job?

It’s not about leaving your job; it’s about finding yourself.

Do you need to be wealthy to have a soulbbatical?

I had a little runway, financially. But I was recovering from a financially devastating divorce, so I was in no way financially free or independent or ready for early retirement. But I decided I was willing to invest in the possibility of my future self.

I think anybody of any means can enjoy a soulbbatical.

How did you spend your soulbbatical time?

I spent eight months traveling and doing deep internal work. After eight months, my father suffered a massive stroke at age seventy-one, that came out of the blue. That became part of my soulbbatical. I got a master’s class in life.

I realized it was time to live life on my own terms. I realized, with subsequent conversations with my dad, that it was time for me to shift to the business of living.

My father had been a CEO and chairman and president of many companies. I realized I had been following in his footsteps. That was an honor, but I was chasing his dream. That was a defining moment for me, thinking: ‘What is my dream? What does Shelley Paxton want to accomplish in this world and what impact does she want to have?’

What is the purpose of a soulbbatical? And what was its purpose for you?

The purpose, as I define it, is rebelling for who you are and what you believe and the impact you want to have.

By the traditional definitions of success, I could tick all the boxes: iconic brand; good title; traveling the world on a motorcycle; making good money. By all accounts, I had it all. But there was something that felt unfulfilled inside of me. I would say I felt I was dying a little on the inside. I was feeling it, from burnout and many illnesses.

Did you plan out your soulbbatical before you left Harley?

It wasn’t spur of the moment, but it was probably not the most planned out thing either.

Six months before I left, I realized I had to take this seriously, even though I was terrified at the thought of leaving and walking away from the privilege and good fortune I’d been blessed with. It gave me a lot of guilt and worry and anxiety. Nobody gets to the peak of their career and walks away — or do they?

I spent time with an executive coach and a financial adviser to mine my feeling and understand what I was looking for.

Why not just switch to another job or field? A lot people do that when they want to find more purpose in their lives.

I knew I was being called to do something different, and that I had to spend time to get to know myself and reconnect with my soul. I kind of laughed at myself, asking: ‘How will you explain this to anyone? It sounds very woo-woo.’

I knew I had to take a break. I thought it might be a year long, but that I might not last a year. I love to work. I thought I might be back in the corporate world in three to six months.

You believe soulbbaticals can be very different for different people.

I tell several stories in the book about other people taking soulbbaticals.

One woman asked for a soulbbatical from a major tech firm in Silicon Valley. That company had no precedent to take a sabbatical, let alone a soulbbatical. She asked for a hundred days off and it completely changed the trajectory of her professional and her personal life.

Another woman and her husband took their family around the world for twelve months. She didn’t have a massive savings account and they had four children. They did it on a shoestring budget, with backpacks and camping.

How do you think someone should plan for taking a soulbbatical?

Find two weeks to do the hard work and go into a proverbial cave and give yourself enough time and space and quiet to listen to your soul and decide what you really want. What life do you want to create?

If someone takes a soulbbatical and is away from work for some time, won’t it be hard to get hired after that?

I can only speak from my personal experience. I don’t necessarily get the phone calls three-and-a-half years out that I did before. Now, I run my own business coaching practice and I write books.

You don’t necessarily know where the journey is going to take you. Mine took me to a place of being an entrepreneur and an executive transformational coach and author. That’s something I never could have predicted.

It can work in a zillion different ways.

Should you get an adviser before starting a soulbbatical?

I’m a big advocate of asking for help; that’s one of the codes of a Chief Soul Officer. Be honest about what you want to set aside to invest in the possibility of your future self, and your time horizon.

Is travel important for a soulbbatical? You have what you call ‘chronic wanderlust.’

I thought travel would be the answer, going to fabulously inspirational places that would help me sort this all out. I did spend some time in France and New Zealand and then following breadcrumbs; there was a different lesson in every place.

There is some value in getting out of your day-to-day. But no landscape is as powerful as your soulscape.

Is midlife a good time for a soulbbatical?

I think there’s a beautiful synergy with that second act. There’s a huge opportunity to say: ‘I’m going to do this on my terms.’

And who shouldn’t consider a soulbbatical?

Someone is not a candidate if they’re not willing to do the work. If this is an excuse to do fun travel or to just walk away from a job and not dig deeper, then don’t call it a soulbbatical. It’s much more of an internal journey than an external journey.

You think more employers should allow, and even encourage, soulbbaticals?

Employers may be nervous about losing employees this way, but courageous leaders will take that risk. I’d like them to flip the script.

High turnover due to burnout is costing companies a fortune. They’re losing good people and paying a lot to replace them. But what would it look like if the employers took care of those people in those roles after taking soulbbaticals, rotating them out to free their mind and body? And then put them back in with tools to manage their roles, so they’ll stay there?

That hasn’t happened yet. But I imagine a world where we can have more of these conversations with c-suite executives, so radical self-care is on the agenda.

I wrote the book with the hope and intent that more of us become Chief Soul Officers. Then, by default and by demand, the conversation we need will happen in companies. I call that ‘the soul of business.’

Amid power outages, CEO of generator maker anticipates ‘massive change’ coming to the grid
What to do if you’re at risk of eviction
Thinking About Refinancing? Act Now—Or Prepare To Pay More
Kamala Harris explains her leadership style (it’s a strategy Bill Gates uses, too)
Protections Lapse For The Nation’s Most Vulnerable Renters, Imperiling Their Small Landlords As Well