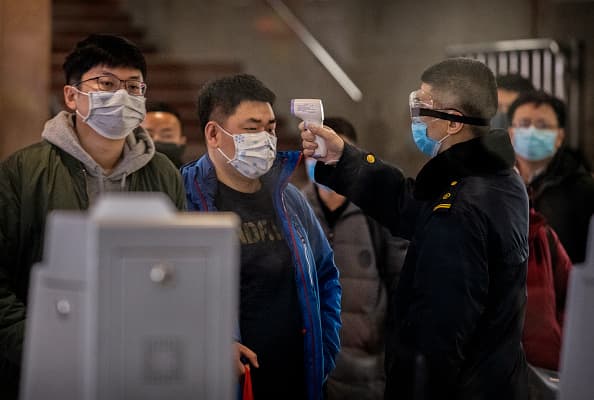 A Chinese passenger that just arrived on the last bullet train from Wuhan to Beijing is checked for a fever by a health worker at a Beijing railway station on January 23, 2020 in Beijing, China.

Former FDA Commissioner Scott Gottlieb predicted on CNBC on Friday the fast-spreading coronavirus outbreak in China is likely more contagious but less severe than the SARS epidemic that rattled markets in 2003 and slowed global economic growth.

“We probably will have some isolated outbreaks [of coronavirus], but that doesn’t mean it’ll translate to an epidemic,” said Gottlieb, a physician, health advocate and Pfizer board member. He left the Food and Drug Administration in April 2019.

The total number of coronavirus cases in China rose to over 900, with 26 deaths. The flu-like virus, which was first identified less than a month ago in the Chinese city of Wuhan in Hubei province, has also infected at least 15 people around the world, mostly in Asia. The U.S. reported one case on Tuesday, a Snohomish County, Washington state, resident who was returning from China.

“But the question is, has it achieved sort of that golden point where it’s contagious enough to spread rapidly but still severe enough to cause a lot of harm?” he said. “We don’t know that yet.”

Physicians have compared coronavirus to the 2003 outbreak of SARS, which had a short incubation period of two to seven days. At the time, WHO officials said it was less infectious than the flu. While there were just eight confirmed cases in the U.S., it infected 8,098 people worldwide and killed 774.

SARS, however, didn’t spread as fast in its first few weeks as the current coronavirus outbreak, according to WHO data. It took almost two months for SARS to spread to 456 people. By comparison, the 2019 coronavirus has already infected more than 900 people in less than a month.