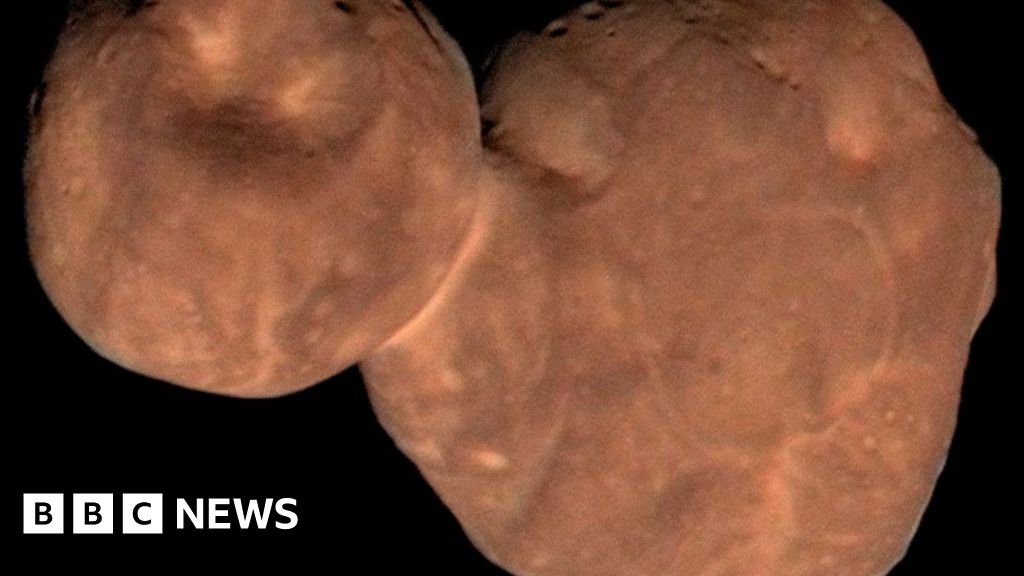 Scientists say they have “decisively” overturned the prevailing theory for how planets in our Solar System formed.

The established view is that material violently crashed together to form ever larger clumps until they became worlds.

New results suggest the process was less catastrophic – with matter gently clumping together instead.

The study appears in Science journal and has been presented at the American Association for the Advancement of Science meeting in Seattle.

The study’s lead researcher, Dr Alan Stern, said that the discovery was of “stupendous magnitude”.

“There was the prevailing theory from the late 1960s of violent collisions and a more recent emerging theory of gentle accumulation. One is dust and the other is the only one standing. This rarely happens in planetary science, but today we have settled the matter,” he told BBC News.

The claim arises from detailed study of an object in the outer reaches of the Solar System. Named Arrokoth, the object is more than six billion km from the Sun in a region called the Kuiper belt. It is a pristine remnant of planet formation in action as the Solar System formed 4.6 billion years ago, with two bodies combining to form a larger one.

Scientists obtained high-resolution pictures of Arrokoth when Nasa’s New Horizons spacecraft flew close to it just over a year ago. It gave scientists their first opportunity to test which of the two competing theories was correct: did its components crash together or was there gentle contact?

The analysis by Dr Stern and his team could find no evidence of violent impact. The researchers found no stress fractures, nor was there any flattening, indicating that the objects were squashed together gently.

“This is completely decisive,” said Dr Stern. “In one fell swoop, the flyby of Arrokoth was able to decide between the two theories.”

He is bullish because these so-called Kuiper belt objects have largely remained the same since the formation of the Solar System. They are, in effect, perfectly preserved fossils from this distant time.

The newer gentle clumping theory was developed 15 years ago by Prof Anders Johansen at Lund Observatory in Sweden. At the time he was a young PhD student. The idea emerged from computer simulations.

After speaking to Dr Stern, I broke the news to Prof Johansen that his theory had been confirmed. There was a pause on the line before he replied that he “felt great”.

He added: “It is a special moment. I remember when I was a PhD student and feeling very nervous about these new results because they were very different to the ones before. I was worried that there was an error in my code or that I had made a calculation error.

“And then when you see these results confirmed from actual observations it is a real relief.”

Prof Johansen commemorated the occasion with a pizza and coke with his family.

Engineer Dr Maggie Aderin-Pocock, who co-presents the BBC’s Sky at Night programme, cautioned against toppling a theory based on the observation of one object, but said that Dr Stern’s interpretation “makes a lot of sense”.

“It is nice to have this evidence because the crashing together theory was a nice theory, but there were some challenges to it. Why did the objects stick together and not bounce apart. There was a lot that didn’t add up.”

When Arrokoth was discovered six years ago, it was known only by its designation 2014 MU69. At the time of the New Horizons flyby, it had been given the informal name Ultima Thule. While that name came from a classical and medieval term for a far-off place at the borders of the known world, its use by Nazi occultists as the mythical homeland of the Aryan race caused controversy.

The official name Arrokoth is a Native American term meaning “sky” in the Powhatan/Algonquian language.