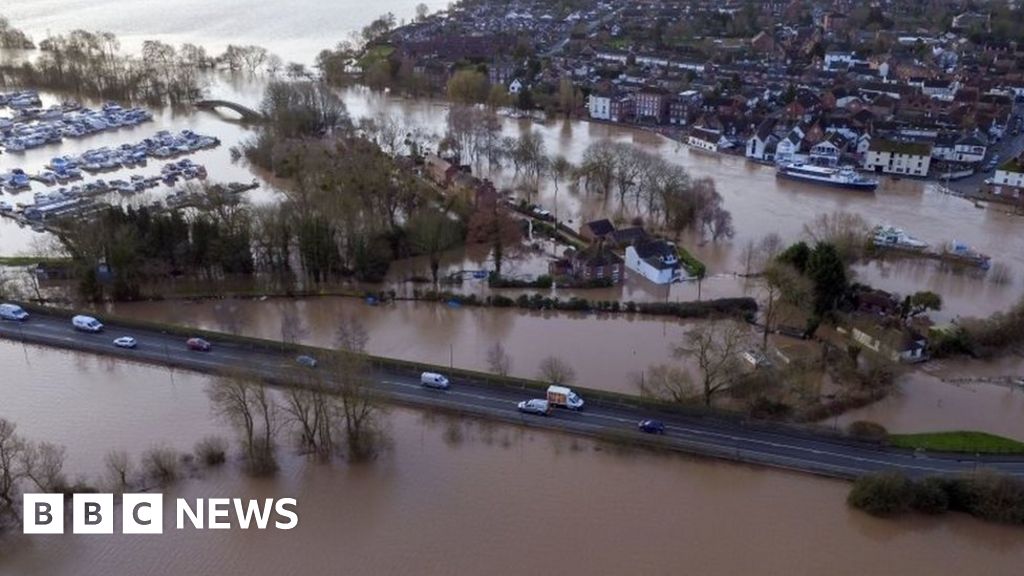 Evacuations are under way on the River Severn in Shropshire amid severe flood warnings across parts of the UK.

One woman died after being swept away in floodwater in Worcestershire, while hundreds of homes have been flooded in extreme weather caused by Storm Dennis.

More than 200 flood warnings remain in place including 10 severe – or “danger to life” – warnings.

The River Wye at Monmouth, in Wales, reached its highest recorded level on Tuesday.

Among the worst affected areas are south Wales, Herefordshire, Worcestershire and Shropshire, where major incidents have been declared.

The latest severe flood warning – for the River Severn in Telford, Shropshire – prompted the evacuation of homes in Ironbridge on Tuesday morning, as water pressure caused the road surface to crack and levels threatened to overtop the barrier.

A care home and surrounding properties in Whitchurch, Herefordshire, were also evacuated after they were overcome by floods, local fire services said.

Meanwhile, Welsh Water has warned drinking water is running out in Monmouth and surrounding areas after “unprecedented flooding” at its treatment works in Mayhill.

There was some relief in Upton upon Severn, Worcestershire, on Monday morning as defences appeared not to have been breached overnight, but severe flood warnings for the area now predict river levels will peak by Wednesday.

Residents of the Wharfage, on the River Severn, have been evacuated to a restaurant on the High Street in Ironbridge, Telford and Wrekin Council said.

The council added that the river’s flood peak was moving towards the Ironbridge Gorge and was expected to arrive there later on Tuesday, while the Environment Agency warned flooding in the Wharfage is “potentially imminent”.

It added that river levels on the Severn could reach 6.7m high by Tuesday afternoon.

It comes as the River Wye at Monmouth, south Wales, peaked at 7.15m high on Tuesday, breaking the previous record high of 6.48m in 2002.

Homes in the area were evacuated on Monday night.

There are two severe warnings in place on the River Wye at Monmouth, according to Natural Resources Wales.

Elsewhere, Drayton Manor theme park in Staffordshire has announced it will remain closed until 29 February due to severe flooding in the grounds.

More than 400 homes and businesses across the country have been flooded, the Environment Agency said – but the number was “likely to rise”.

On Monday night, police advised people in Upton upon Severn and Uckinghall in Worcestershire to leave their homes, and an emergency shelter was opened.

There were fears that defences built after the 2007 floods to withstand a 100-year event could be breached overnight.

However, the Assistant Chief Constable of West Mercia Police, Geoff Wessell, said there was “relief” in Upton upon Severn on Tuesday morning as water levels did not top the defences.

Speaking on BBC Breakfast, he advised people to remain cautious, not to drive through floodwater and to remain ready to leave their homes if they need to.

Ralph Thompson, who runs the Swan pub in Upton upon Severn, stayed there overnight with his girlfriend and their dogs.

He told the programme it had been a “long and worrying” night.

On Monday, the body of 55-year-old Yvonne Booth was found after she was swept away by floodwater when her car became stuck near Tenbury Wells.

Her family said in a statement: “Yvonne is a very much loved member of our family and we are all devastated by this news.”

Currently, there are eight severe flood warnings in England and two in Wales, covering the rivers Lugg, Severn, Wye and Trent.

There are no severe warnings in Scotland.

More rain is expected in parts of the UK later this week, with three yellow Met Office weather warnings issued for north and south Wales and northwest England for Wednesday evening.

The Environment Agency said about 1,000 staff were on duty on Monday night, with 5km of flood barriers deployed and 90 pumps in action.

The prime minister has resisted calls to chair a meeting of the government’s emergency committee Cobra over the flooding crisis, despite criticism from the Labour Party.

Shadow environment secretary Luke Pollard said it was a “disgrace” that Boris Johnson had “refused” to visit affected communities.

Environment Secretary George Eustice defended its response to the storm, telling the BBC the government “can’t protect every home”.

Mr Eustice said about £2.5bn has been spent on tackling extreme weather conditions since 2015 and £4bn has been allocated for the next five years.

Downing Street said Mr Johnson would receive “regular updates” on the flooding, which it described as “terrible”.

Travel continues to be disrupted across the UK, with some A-roads closed and train lines disrupted.

Several schools have been closed and roads remain blocked by floods and landslips.

The government has activated an emergency funding scheme for areas affected by the flooding, which include parts of Nottinghamshire, Leicestershire, Derbyshire, Shropshire, Telford and Wrekin, Worcestershire and Herefordshire.

Under the Bellwin scheme, local authorities can apply for the government to reimburse non-insurable costs above a certain threshold, which has not been specified.

How have you been affected by Storm Dennis? Tell us your story by emailing haveyoursay@bbc.co.uk.

Coronavirus: Putting the spotlight on the global wildlife trade
DOT: Airlines must give refunds — not just vouchers — when flights are axed amid coronavirus
African governments team up with tech giants to fight coronavirus lies
Oil drops following a record surge last week, as OPEC meeting on a production cut is delayed
Coronavirus brings Boeing’s US airplane production to a halt