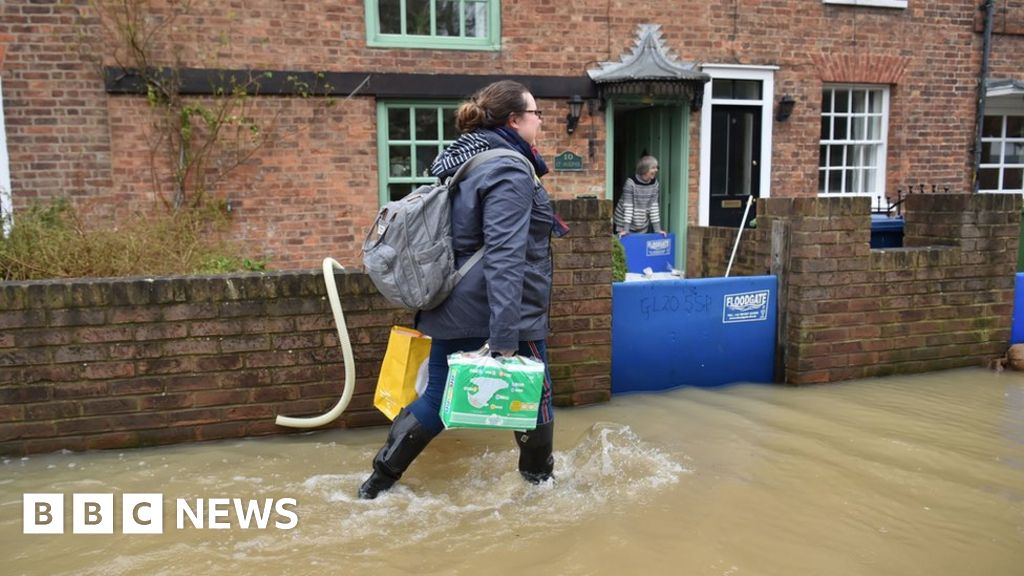 About 1,400 homes and businesses have been affected by the floods in the wake of downpours brought by Storm Dennis.

The Rivers Wye and Severn reached their highest-ever levels, with people evacuated from nearby at-risk areas.

Across the UK, around 120 flood warnings remain in place, including six severe – or “danger to life” – warnings.

Among the worst affected areas are south Wales, Herefordshire, Worcestershire and Shropshire, where major incidents have been declared.

The risk of landslips and flooding from further downpours also means speed restrictions have been introduced on trains in Cumbria and north Lancashire – with delays of up to 30 minutes expected on some routes until Thursday morning.

In Worcester, Heather Hill – who was helping to clear the water from the home of her stepfather, 63, and grandmother, 92 – said the flooding in their neighbourhood was worse than any time since 2000.

“It’s coming through any gap it can get through. We’re trying to brush it into the pumps to get it out,” she told BBC Radio 5 Live. Her stepfather had not been sleeping, she said, “just keeping an eye on the pump”.

Tony Cox told BBC Radio 5 Live he was rowing a boat into and out of his house in Severn Stoke, Worcestershire, with flood defences for the village having been held up by planning bureaucracy.

He said he feels “resigned” after four or five major floods since 2000. “There’s nothing we can do about it, it’s a question of how high it’s going to get to,” he said.

Tory MP Craig Whittaker – who represents the Calder Valley in West Yorkshire, which was badly affected by Storm Ciara – said the government’s response to the flooding has been inadequate.

He told the BBC’s Today programme he had been “hammering on doors on Whitehall” since the flooding began nine days ago to get the government to trigger its emergency funding scheme, which was announced on Tuesday night.

As of 11:00 GMT on Wednesday morning, 645 properties had been flooded across England because of Storm Dennis, the Environment Agency (EA) said.

And in Wales, around 800 homes have been directly affected by the floods, said First Minister Mark Drakeford.

The EA said the levels of the Wye and Severn would remain high into the weekend.

“We expect further disruptive weather into tomorrow and Thursday, bringing a significant flood risk to the West Midlands, and there are flood warnings in place across much of England,” said the EA’s John Curtin.

Homes along the River Severn in the towns of Ironbridge and Bridgnorth in Shropshire were evacuated on Tuesday as river levels continued to rise.

There were concerns that flood barriers could be breached in Bewdley and also Upton upon Severn, where two local children baked biscuits and took them out to “everyone who’s helping”.

Currently, there are six severe flood warnings in England, covering the rivers Lugg, Severn, and Wye. There are 106 further flood warnings.

What to do if you’re at risk of flooding

The Environment Agency’s flood warnings mean “immediate action” is required. But what should you do? Here’s what the agency suggests:

The River Wye at Monmouth, in Wales, reached its highest recorded level on Tuesday.

In the town, mountain rescue teams evacuated an elderly man from his home by breaking down his back door with a sledgehammer and taking him to safety on a raft.

Welsh Water has asked people in Monmouth to reduce their water usage after a treatment works in Monmouthshire flooded.

The Met Office warnings for rain cover south Wales and north-west Wales from 15:00 GMT on Wednesday until 12:00 on Thursday, with 70-100mm (4in) of rain likely in the north west.

North-west England is warned to expect similar levels of rain, with a yellow warning in place from 18:00 on Wednesday to 15:00 on Thursday.

Another warning is in place for the west of Scotland from 14:00 on Wednesday until 11:00 on Thursday, with “persistent and occasionally heavy rain”.

On Friday, a further warning comes into force for Yorkshire from 12:00 on Friday until 06:00 on Saturday, with 60-80mm (3in) of rain expected in some of the areas which have already seen the wettest conditions.

The Scottish Borders and north-east England face another yellow warning for wind between 08:00 GMT and 20:00 on Friday, with gusts of up to 65mph expected in some places.

The EA said more than 6km of temporary flood barriers have been put up across England and flood defences have protected nearly 25,000 properties.

Chris Wreghitt, who lives in the village of Powick, in Worcestershire, says he has been flooded before but not this badly and not since flood defences were built.

He told BBC News: “Although there have been a couple of near misses over the past few years, we were still confident that we wouldn’t get flooded again.”

People in flood-hit households can apply for financial hardship payments of up to £500 for short-term relief, the government announced on Tuesday.

Local Government Secretary Robert Jenrick said the funding would “help people in the worst-hit areas to recover and get back on their feet”.

The government support fund also includes up to £5,000 for affected residents and business owners to help make their properties more resilient to future floods.

On Sunday, Yvonne Booth, 55, was killed by the floods after being swept into floodwater near a bridge which crosses the River Teme, near Tenbury Wells, Worcestershire.

Have you been affected by flooding in your area? Have you made an insurance claim? Tell us your story by emailing haveyoursay@bbc.co.uk.

Coronavirus: Tiger at Bronx Zoo tests positive for Covid-19
Mohamed El-Erian: The stock market could still go back down to new coronavirus lows
Conifer is top tree in urban sound absorption test
El-Erian says he wouldn’t buy into market yet, but offers a plan for those who feel they must
Coronavirus live updates: Singapore quarantines nearly 20,000 workers, South Korea reports fewer than 50 new cases