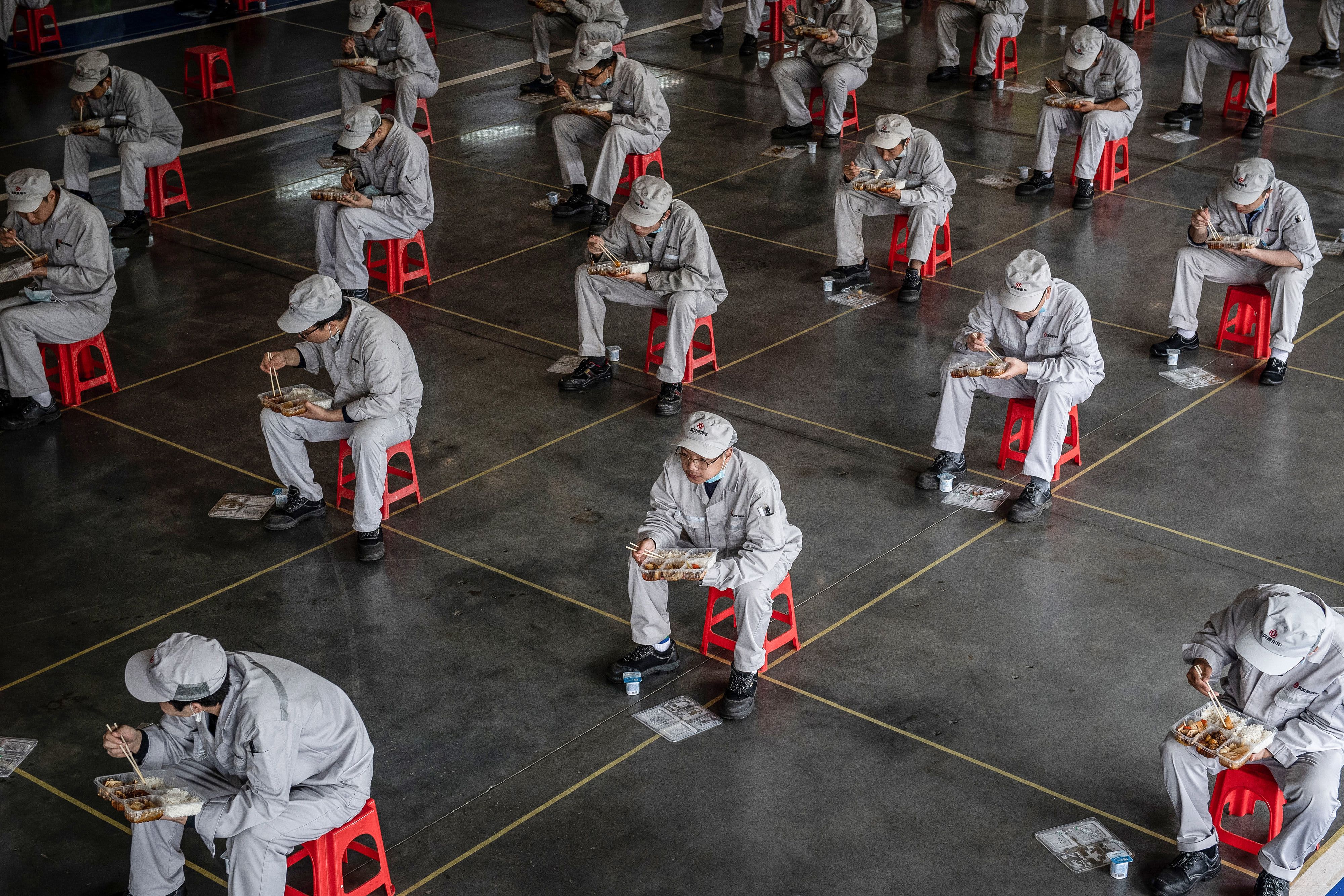 This photo taken on March 23, 2020 shows employees eating during lunch break at an auto plant of Dongfeng Honda in Wuhan in China’s central Hubei province.

This is a live blog. Please check back for updates.

All times below are in Beijing time.

“It’s another example and indication of people who are stepping up in significant ways,” Newsom said. Cases in the US now total 53,660, according to the latest data from Johns Hopkins University. — Salvador Rodriguez

China’s National Health Commission reported 47 new confirmed cases as of March 24. It said all new cases were all imported, meaning they traveled from overseas. There were also four more deaths.

The NHC reported that there were no new cases in Hubei province — the epicenter of the outbreak, but three of the deaths were in the province.

That brings China’s total to 81,218 confirmed cases, and 3,281 fatalities. The total number of imported cases was 474, according to the NHC.  — Weizhen Tan

7:50 am: Asia markets set to jump as US shares soar

Stocks in Australia surged 6% in early trade, while Japan markets were also set to jump. That followed giant gains on Wall Street, where the Dow Jones Industrial Average surged more than 11% to its best one-day percentage gain in 87 years, and the S&P 500 rallied 9.4% to 2,447.33 for its best day since October 2008.

Investor optimism has risen with U.S. lawmakers closing in on a massive fiscal stimulus bill worth $2 trillion to combat the economic impact of the coronavirus pandemic. — Weizhen Tan

All times below are in Eastern time.

7:02 pm: Trump approval rating rises as he responds to the coronavirus outbreak

Crises are often the ticket to higher approval ratings for politicians, and President Donald Trump, it appears, is no exception.

During an election year, any bump could have significant ramifications.

Earlier this month, Trump’s approval rating was at 44%, according to Gallup. The 5-point boost comes amid the president’s near-daily participation in coronavirus task force briefings and series of moves to combat the pandemic in the United States. —Yelena Dzhanova

6:23 pm: White House official tells anyone who has left NYC that they should self-quarantine

Members of the White House coronavirus task force urged those leaving New York City to self-quarantine for 14-days in order to stop the spread of COVID-19 during a press briefing on Tuesday.

Deborah Birx, the task force coordinator, and Anthony Fauci, another task force member and the director of the National Institute of Allergy and Infectious Diseases, said the precaution was necessary given the high rate of infections in the nation’s most populous city. —Tucker Higgins

5:15 pm: Los Angeles health officials say a child under 18 has died from the coronavirus

A child under 18 has died from the coronavirus in California, Los Angeles County health officials announced Tuesday.

“Tragically, one of the people who died was a person under the age of 18, a devastating reminder that COVID-19 infects people of all ages,” Dr. Barbara Ferrer, director of the County of Los Angeles Public Health Department, said at a news briefing.

The patient was from Lancaster, California, the county’s health department said in a press release. Ferrer did not provide more details such as the precise age of the patient or whether they had underlying health conditions. Representatives from the health department weren’t immediately available for further comment. —Will Feuer

In the U.S., the virus has infected more than 50,206 people as of 2:15 p.m. EDT and killed at least 600 people, according to Johns Hopkins University. New York state, which has 25,665 confirmed cases as of Tuesday, according to Gov. Andrew Cuomo, accounts for nearly half of all cases in the U.S.

Confirmed U.S. cases passed 5,000 just one week ago. On March 1, there were roughly 100 confirmed cases in the U.S. —Will Feuer