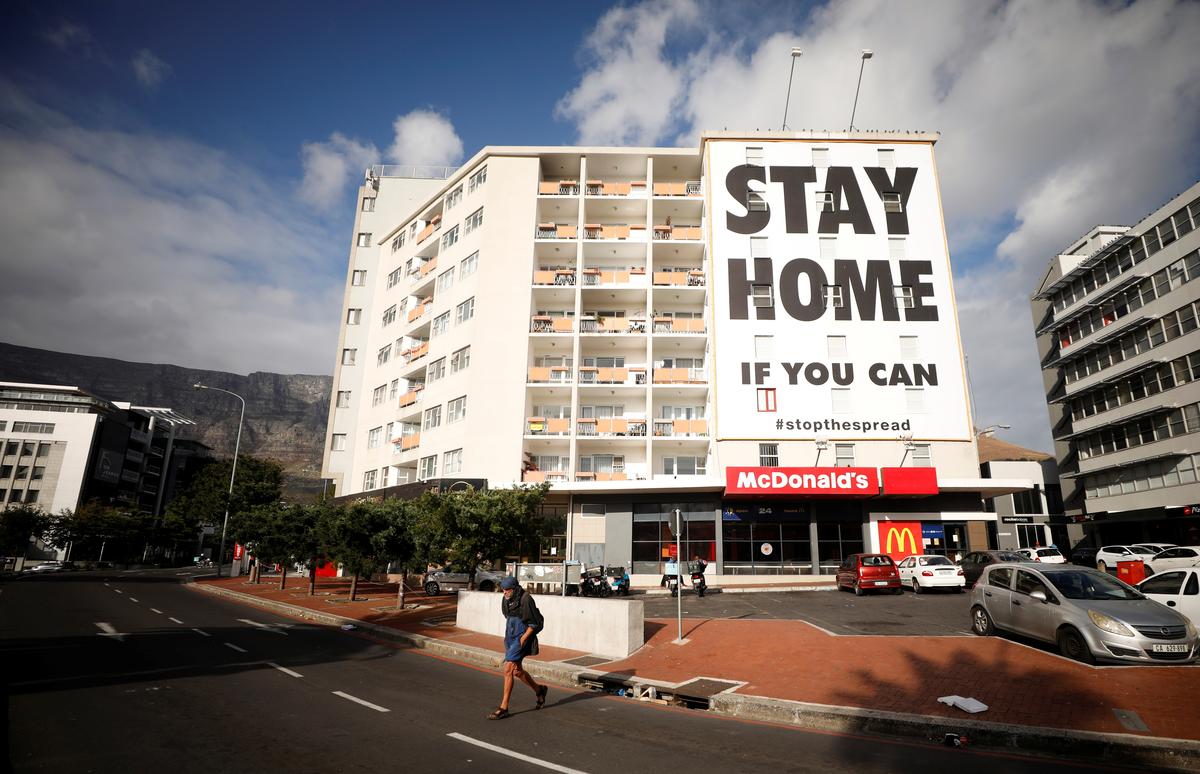 PRETORIA (Reuters) – South Africa’s number of coronavirus cases jumped to more than 900 on Thursday and President Cyril Ramaphosa called for richer countries to help African nations deal with the economic fallout, hours before the start of a countrywide lockdown.

A man walks past a poster covering the side of a building ahead of a 21 day lockdown aimed at limiting the spread of coronavirus disease (COVID-19), in Cape Town, South Africa, March 26, 2020. REUTERS/Mike Hutchings

The president underwent a test on Tuesday on the advice of doctors and received a negative result on Wednesday night.

“We now have more than 900 people who are infected, as the minister told me, and we fear that it might rise even much further than that,” the president said in Pretoria.

“We as Africa have called upon the countries of the G20, particularly the more developed economies, to support stimulus packages to Africa,” he said, adding that they had also called for IMF and World Bank debt relief.

Ramaphosa has been praised for ordering some of the toughest measures on the continent, including a 21-day lockdown to begin on Friday morning from midnight. He has deployed the army to support the police.

But the lockdown threatens to cripple an economy already beset by power cuts and shrinking since the end of last year.

“I’ve got two months cash in the bank. Nothing more. After that we close down,” Rajan Govender, 51, said at his family-run Indian restaurant in a Johannesburg suburb as he prepared to send staff on compulsory paid leave.

“We can weather a few weeks, but not longer.”

Mining and metal refining companies, the core of South Africa’s economy, are either reducing or shutting down production altogether.

Mines Minister Gwede Mantashe said on Wednesday that South Africa will continue to process platinum group metals, even as gold, chrome, manganese are scaled down.

The rand has hovered around four year lows for the past two and a half weeks, and on Thursday it weakened from a brief respite, as relief faded over an announcement by the central bank of a quantitative easing program.

State power utility Eskom has applied for its critical staff to be exempt from the stay at home order so electricity supplies will not be interrupted. It has said coal supplies are adequate.

Businesses are bracing for further damage from the lockdown, with Airlink becoming the latest local airline to suspend flights from midnight on Thursday. State-owned South African Airways (SAA), already massively unprofitable and with an unsustainable debt burden, has also canceled flights.

SAA’s creditors have authorized an extension of a deadline for the airline’s business rescue plan until May 29, the airline’s administrators said on Thursday.

UK tech industry forms Code4COVID.org to fight the Coronavirus crisis
Need quick cash amid the coronavirus crunch? Turn here before tapping your 401(k)
Small businesses offered loans in coronavirus relief bill as they struggle to stay afloat. Will it be enough?
Congress likely to send taxpayers $1,200 checks in coronavirus aid. Here’s who qualifies
Coronavirus: Things will get worse, PM warns in letter to Britons