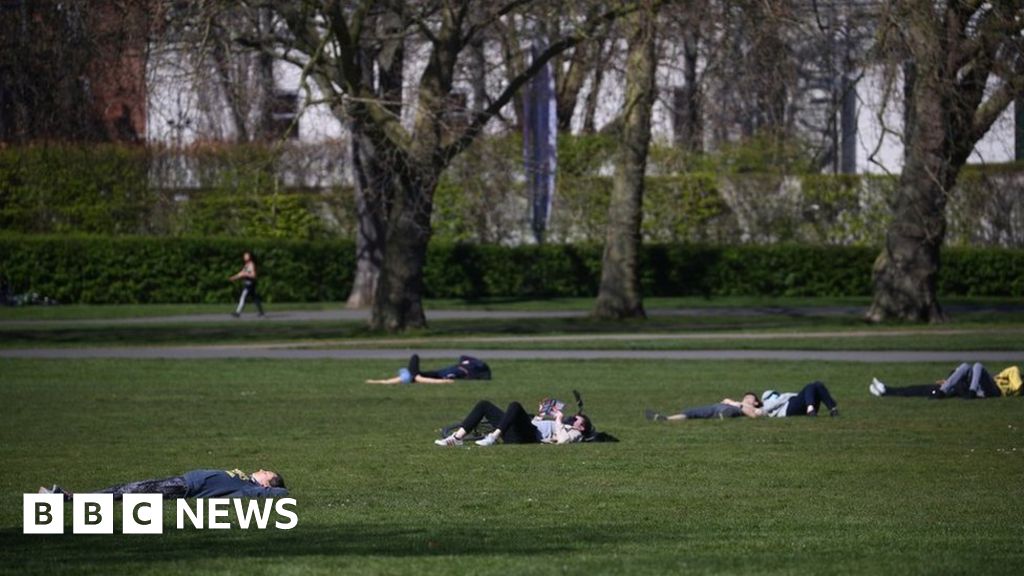 People across the UK appear to be adhering to social distancing rules despite the temptation to go out in the sunny weather, Cabinet Office Minister Michael Gove has said.

Police face “one of their biggest challenges” of the coronavirus lockdown as the weather improves.

He said there was “evidence to suggest” there has been a lower level of compliance among young people.

It might be that some of the government’s messages have not reached some segments of the population, he explained, adding: “It may be that young people feel that they are less likely to be affected and less likely to be infected.”

NHS England medical director Stephen Powis added: “The sun might be out, but that does not mean you should be out.”

“This is the time we need to make sure we stick to that guidance and don’t deviate from it.”

The warning comes as the number of coronavirus deaths in the UK has risen above 4,000, including a five-year-old with underlying health conditions.

Mr Gove told the briefing: “I know that lockdown is challenging, I know it’s very difficult, particularly for families with children.

“But people must at every stage respect these guidelines because that is the only way of making sure we restrict the spread of the disease.”

When asked about an exit strategy, he said: “There’s no fixed point, no specific date in the calendar at which we can say things will change, we are keeping them under review.

“The prime minister said that the current lockdown proposals will be reviewed in what is just over a week’s time.”

A forecast of warm weather across much of the UK this weekend has led to warnings from local councils, tourism bosses and police urging people to stay away from coastal areas, national parks and other visitor destinations.

Restrictions state that everybody must stay at home where possible, and only leave if they have a “reasonable excuse”, such as exercise or shopping for basic necessities.

Katy Bourne, Sussex Police and Crime Commissioner, told BBC Newsnight this weekend was set to be “one of the biggest challenges for policing so far”.

Devon and Cornwall Police Chief Constable Shaun Sawyer told the BBC it was a “pivotal weekend”, urging people to “play their part” and avoid travel.

Mr Sawyer told the BBC that people would have to examine their own conscience if they endangered lives by travelling to tourist hotspots this weekend.

“If a £60 ticket makes you do something and 684 people dying yesterday didn’t, then I think you’ve got to take a good look at yourself as to whether you’ve realised the seriousness and significance of where we are,” he said.

He added that officers would in the first instance “explain” and “encourage” people to follow government guidelines on essential travel, describing enforcement as “a last resort”.

Brighton and Hove City Council tweeted on Saturday that too many people were meeting up with friends on the seafront, making social distancing “impossible”.

Meanwhile, Lambeth Council in south London said Brockwell Park would be closed on Sunday after more than 3,000 people spent the day there sunbathing or in large groups on Saturday.

Meanwhile, the latest figures showed 4,313 people with the virus have now died in the UK, up by 708 on Friday’s figure.

This includes a further 46 people in Scotland, 13 people in Wales and eight more in Northern Ireland.

There are now 41,903 confirmed cases, the Department of Health said.

How have you been affected by the coronavirus? Tell us about your experience by emailing haveyoursay@bbc.co.uk.

Student loan borrowers could get three-year relief as pandemic eases
These Are The Lowest Mortgage Rates Being Offered Right Now
Coronavirus: Countries try ‘travel bubbles’ to save post-lockdown tourist season
Kevin O’Leary’s advice for small business owners as the economy reopens: ‘Practice being thrifty’
Who Wins In Recessions? The Rich And Lucky.