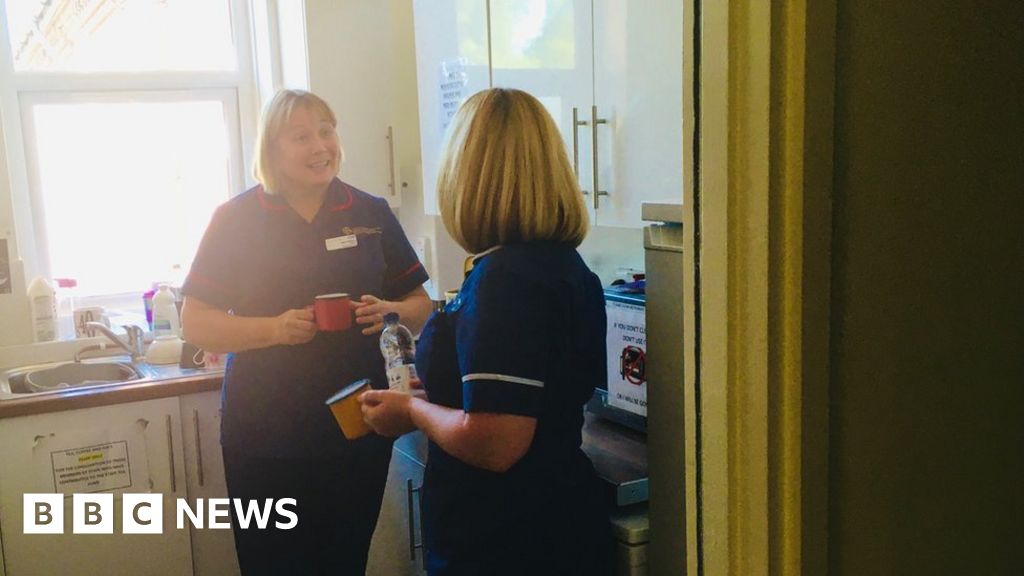 The extraordinary fundraising achievement of Capt Tom Moore – now Sir Tom Moore – have been well documented. But what has the money he raised been spent on?

The £32.8m raised by centenarian Sir Tom was in aid of the health service’s charitable wing, NHS Charities Together. It is part of an overall £116m collected for the fund as part of its Covid-19 Urgent Appeal. Some £20m has been spent so far.

Despite publicity given to shortages of protective clothing for staff, and the need for medical apparatus, these are classed as “core” equipment and funded by tax payers. The focus of Charities Together is the comfort and wellbeing of staff and patients – things that, in the words of one NHS worker, “make their working lives easier”. Here are some examples.

Snacks for staff in County Durham

Cath Scott has just finished a six-week stint on a Covid-19 ward in Darlington Memorial Hospital when she picks up the phone. She usually manages a specialist ward for patients suffering from stomach and liver problems. But when the outbreak began, she found themselves redeployed around the hospital, working with new faces in uncertain territory.

“We’re used to looking after patients with infections and things, but this has been a new virus and people were very frightened, really,” she says, adding that the perks bought with the appeal money have made her job “a little bit easier in a difficult time”.

Welfare packs of sandwiches, drinks and energy bars were delivered to wards at the height of the outbreak when staff were unable to take breaks or were reluctant to leave their patients. Staff were given lip balms and hand creams – for lips left chapped and dry under face masks, and hands cracked from constant washing during long shifts.

With most of the appeal money yet to be handed out, Cath hopes to see longer term improvements, too. Before the outbreak, staff had to share the few lockers they had between them or leave their handbags and phones in communal spaces during shifts. With the money from the donations, they now have one each.

“In the NHS there hasn’t really been money for things like that – not luxury items, but things that aren’t necessarily essential,” she says. “They will make a big difference.”

For Cath, the hardest part of the pandemic has been caring for patients cut off from their families. Initially staff used their own mobile phones so patients – especially the elderly ones – could, in some cases, say their final goodbyes. Now the wards have iPads, bought with the appeal money.

Pop-up shops in the capital

About 250 miles away, the funds have been used to open a free pop-up staff shop in London’s Charing Cross Hospital. A&E matron Emma Tippins says being able to pick up a can of Coke during a break from a 14-hour shift has made a “huge difference”.

“When the peak hit, we probably had three weeks where I really didn’t have many days off because I felt I should be here all the time. And wearing PPE is exhausting,” she says. “And some of the work was really sad… We’re used to major incidents and trauma, but this was protracted.”

That is why she thinks being able to pick up a microwaveable meal or fresh fruit for free – especially for those whose partners are out of work – has been so important.

“All the kindness that we’ve been experiencing has had such a positive impact,” she says. “Something that is so little like popping to a shop on your way home is just a bit too much sometimes.”

Space to relax in Scotland

Not all of the stress caused by the pandemic has fallen on those on the wards. In Edinburgh’s Western General Hospital, quality improvement adviser Laura Thomson has been helping teams adapt to new, challenging ways of working.

To help unwind, she and others have been taking advantage of the hospital’s wellbeing wing – an old library which, using the donations, has been kitted out with comfortable chairs and quiet rooms. Therapists even offer staff free foot massages.

“You know when you’re going really, really quickly and you’re running from one thing to another?” she says on the phone. “To be able to use your break to go and do something like that – just to ground you and make you take a moment to stop and pause and relax – I actually felt lighter on my feet afterwards.”

For Helen Williams, a matron in the critical care department in Wrexham Maelor Hospital in Wales, simple provisions can make a big difference: tea and coffee bought for their kitchenettes, bottles of water in the new fridges for staff working in “extreme heat”.

“I’ve had nurses faint on duty in PPE,” she says. “Just being able to come out and have a cold drink, a cold bottle of water is just unbelievable.”

The money is supplementing a pre-existing nurses’ fund that became overstretched as more staff were brought into her department.

“It’s topping up funds so we have the opportunity to take somebody who’s having a really difficult day aside and say, ‘Look let’s have a cup of tea, let’s talk about it’,” she says.

The money has also been spent on training, and Helen hopes it will also be used for bereavement support groups and a critical care garden for patients.

“For us it’s much more about the small things… To help everybody heal.”

You may soon lose unemployment benefits — and that extra $600 a week — if you’re not hunting for jobs
What you need to know before taking out a home equity loan or borrowing from your 401(k)
Social Security’s trust funds at a greater risk for running dry amid pandemic. What that means for your retirement
American Airlines tells Boeing: No financing, no 737 Max deliveries
Coronavirus: Quarantine rules end for dozens of destinations