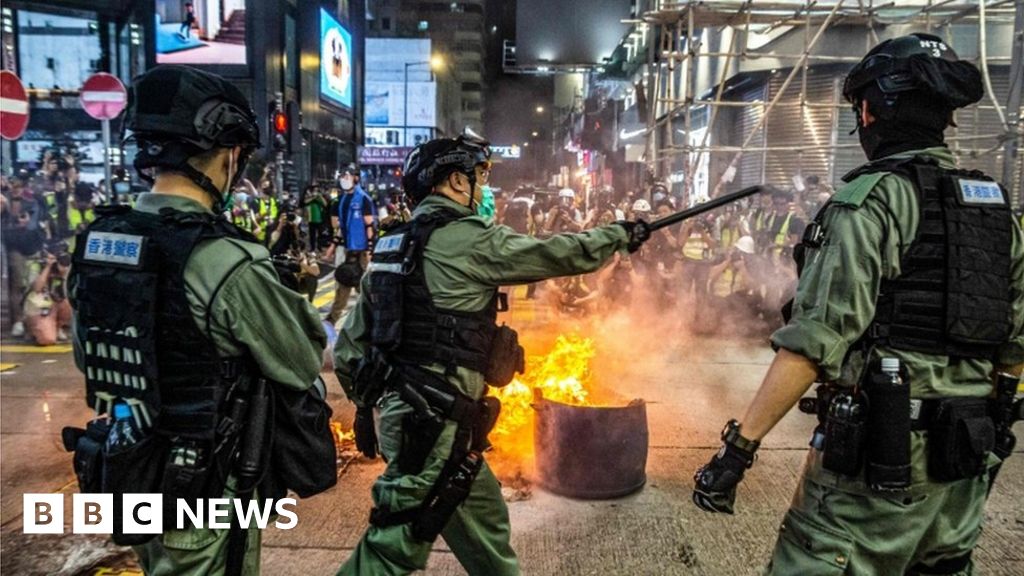 China’s parliament has backed a new security law for Hong Kong which would make it a crime to undermine Beijing’s authority in the territory.

The bill – which now passes to China’s senior leadership – has caused deep concern among those who say it could end Hong Kong’s unique status.

It could also see China installing its own security agencies in the region for the first time.

The move has already sparked a new wave of anti-mainland protest.

Clashes broke out on Wednesday as Hong Kong’s parliament debated a different proposed law, which would make it a crime to disrespect the Chinese national anthem. Hundreds of people were arrested in protests over that and the security law.

Security remains high on Thursday, as a tense debate in the Legislative Council continues.

At least two pro-democracy legislators were ejected from the council on Thursday. One lawmaker, Ted Hui, threw rotten plants on to the floor of the chamber, saying it symbolised the decay of Hong Kong’s political system.

“I want the speaker to feel what is meant by rotten,” he said.

The speaker deemed the package to be an “unknown dangerous object”, and called police and fire crews.

What has the reaction been?

Full details about exactly what behaviour will be outlawed under the new law are not yet clear. It is due to be enacted before September.

But hours before the bill was passed, US Secretary of State Mike Pompeo said developments in Hong Kong meant it could no longer be considered to have “a high degree of autonomy” from mainland China.

That meant that Hong Kong no longer merited being treated differently from the mainland under US law.

The declaration could have major implications for Hong Kong’s trade hub status and drew an angry reaction from Chinese authorities in the territory.

In a strongly worded statement on Thursday, the office of China’s foreign ministry in Hong Kong said it “firmly opposed and refuted” Mr Pompeo’s statement and urged the US to “immediately stop meddling” in China’s internal affairs.

It described US criticism of the new draft law as “utterly imperious, unreasonable and shameless”.

The National People’s Congress (NPC) – meeting in Beijing after a two-month delay caused by the coronavirus pandemic – backed the security bill resolution with 2,878 votes in favour, one against and six abstentions.

“It will uphold and improve the ‘one country, two systems’ policy,” NPC chairman Li Zhanshu told delegates during the closing ceremony.

“It is in line with the constitution and Hong Kong’s Basic Law and is in the interest of all Chinese people including Hong Kong people,” he added.

The NPC only ever approves legislation put to it by the government so there was no chance the bill would not be supported.

The bill – referred to as the Draft Decision – now passes to the Standing Committee of the Communist Party which will draw up the full details of the new law.

It is expected to criminalise:

That means China could potentially have its own law enforcement agencies in Hong Kong, alongside the city’s own.

The authorities in Hong Kong insist the law is essential to tackle growing violence and “terrorism”, and that the territory’s residents have nothing to fear from it.

Critics fear it could lead to Hong Kongers being prosecuted – even retroactively – for criticising their or the mainland’s leadership, joining protests or exercising their current rights under local laws.

Why did China do this?

Hong Kong was handed back to China from British control in 1997, but under a unique agreement – a mini-constitution called the Basic Law and a so-called “one country, two systems” principle.

They are supposed to protect certain freedoms for Hong Kong: freedom of assembly and speech, an independent judiciary and some democratic rights – freedoms that no other part of mainland China has.

Under the same agreement, Hong Kong had to enact its own national security law – this was set out in Article 23 of the Basic Law.

But its unpopularity meant it had never been done – the government tried in 2003 but had to back down after protests.

Then, last year, protests over an extradition law turned violent and evolved into a broader anti-China and pro-democracy movement.

China is keen to avoid a repeat of that unrest.

What you need to know before taking out a home equity loan or borrowing from your 401(k)
Coronavirus fears are pushing investors back into stay-at-home trades
Real Estate And The Future Of Work
Coronavirus: Quarantine rules end for dozens of destinations
Jack Charlton: Tributes paid by England, Republic of Ireland and former clubs