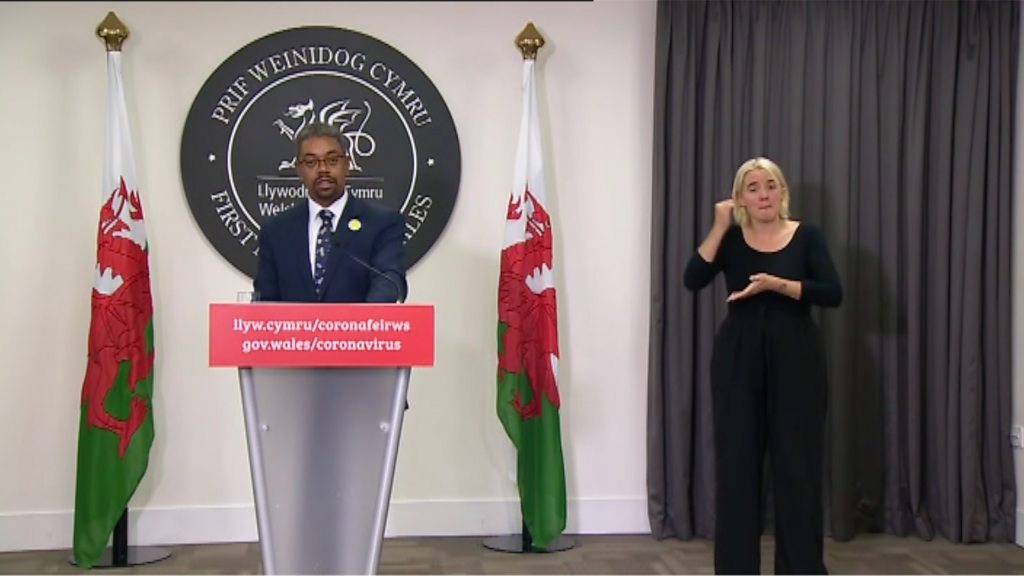 A second county in Wales will go into lockdown because of the rate of coronavirus cases.

The 240,000 people living in Rhondda Cynon Taff will have restrictions imposed on their daily lives.

From 18:00 BST on Thursday, people will not be able to enter or leave the area without a reasonable excuse, such as travel for work or education.

All licensed pubs, bars and restaurants will have to shut at 23:00 every day, once the lockdown comes into effect.

Rules allowing people to meet others from their extended households indoors will be suspended in the county.

Health Minister Vaughan Gething said there had been a “rapid” rise in cases, with 82.1 infections per 100,000 people over the past seven days.

It is the second local lockdown in Wales, after Caerphilly was subject to restrictions last week.

Wednesday’s rate of positive tests for the last week in RCT was 5.1% – the highest in Wales. Mr Gething previously warned a positive rate of 4% across Wales would trigger a national lockdown.

Figures on Wednesday showed RCT’s case rate had almost caught up with Caerphilly, which has 83.4 per 100,000 people over the last seven days.

Contact tracing teams had been able to trace about half of the coronavirus cases in RCT “back to a series of clusters within the borough”, the minister told a press conference.

“The rest are evidence of community transmission.”

One cluster is associated with a rugby club, and a pub in the lower Rhondda valley, another is connected to a club outing to the Doncaster races, which Mr Gething said stopped off at a series of pubs on the way.

A review into the lockdown will be held in two weeks’ time.

Under the lockdown rules, no one will be able to leave or enter the county without a reasonable excuse.

The list of excuses to travel is the same as that seen in Caerphilly, including:

Motorists will be able to drive through the county borough, providing they do not stop.

The rules can be enforced by a system of fixed penalty notices, which start at £60 to a maximum of £1,920, or unlimited fines in the courts.

Rules allowing people to meet six people from their extended household will not apply in RCT.

Mr Gething said residents will be able to meet outdoors “for the time being”.

The lockdown restrictions have been imposed despite people in RCT having been asked to take extra precautions last week.

Rhondda Labour MP Chris Bryant said he had been “warning this would be necessary”.

“Now we need to stick to the rules and get the transmission rate down to protect the NHS and the most vulnerable.”

Pubs to shut at night, but not to close altogether

The difference in rules around pubs in RCT and Caerphilly prompted questions from the Welsh Conservative health spokesman Andrew RT Davies.

“The health minister must explain the rationale behind this and give guidance across Wales to prevent other lockdowns.”

Mr Gething said pubs were a “factor in transmission” in RCT but had not been in Caerphilly.

He said a series of bars and pubs have faced closures and improvement notices in the area.

A further 50 licensed premises were visited by council officers over the weekend, Mr Gething said.

Asked why he was not closing all pubs in RCT, Mr Gething said “if there are no opportunities to drink in licenced premises we may see more people breaking the rules and drinking in each other’s homes”.

Why You Should Save Like A Pessimist, But Not Invest Like One
DraftKings surges after announcing ESPN deal
Rising virus rates threaten economy, warns Bank
Airlines, labor unions again push for another $25 billion in federal aid as more than 30,000 job cuts loom
IRS Sweetens The Pot With New Marijuana Industry Web Page