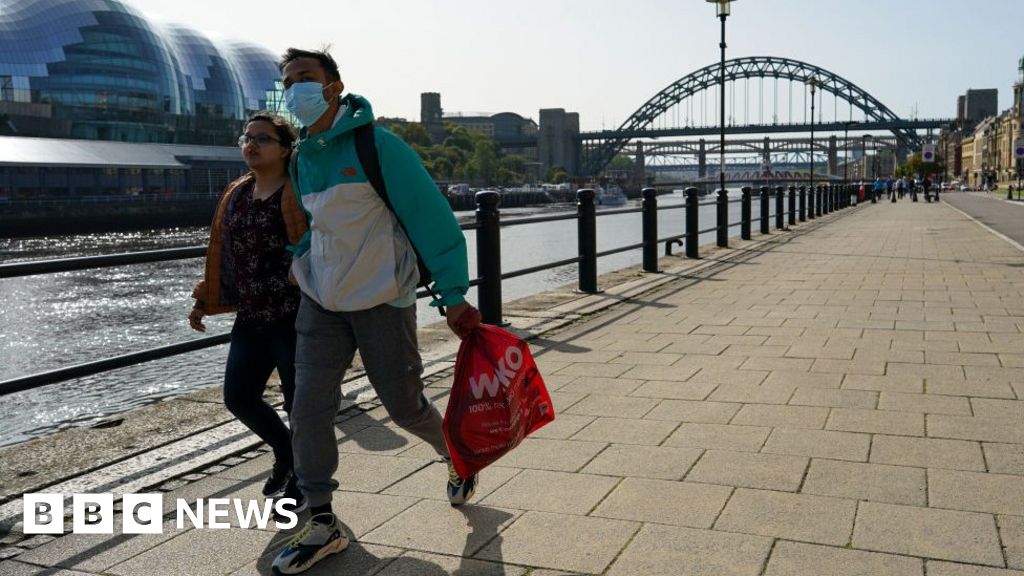 Currently, half of the population in northern England and a fifth of people in the Midlands are facing extra restrictions to curb coronavirus infection rises.But no local authority south of Solihull is currently imposing these measures.So, is the virus spreading more in the North than the South?

What does the data show?

The main data we’ve got is the number of coronavirus cases picked up through testing.

This shows that, although London initially had the largest spike in Covid-19 cases in early April, northern England has had the highest sustained rates of coronavirus infection since mid-April.

This compares with rates in southern England which are at their highest since early June but are still at about 10 cases per 100,000.

Looking at these rates doesn’t necessarily tell the full story though.

We know that some lockdown areas or places identified as “hotspots” have received mass testing. A report on the local lockdown in Leicester, for example, confirms that testing was done door to door.

And when you test more people, you are more likely to find cases which could contribute to a rising rate.

However, other data sources do confirm a gap between the regions. These show the same sustained differences over time, although perhaps at a smaller gap than case rates suggest.

For example, in recent weeks the proportion of tests that prove positive has been increasing across the country, but is highest in northern regions.

In the North West and Yorkshire, 7% of tests done on the public are coming back positive (double the figure of a month ago), while in the South East and South West this number remains below 2%.

And the Office for National Statistics infection survey, which is used to get an estimate of coronavirus in the broader population who might not get a test, shows that samples taken in the North West and North East are coming back positive at about twice the rate of the South.

The samples also show that London has high rates which are comparable with the north, something not picked up in the same way by the testing system’s case rate.

Hospitalisation rates of people with coronavirus continue to remain low compared with the initial spike, but once again demonstrate a marked regional difference:

The final bit of data we can look at is excess deaths, which show the number of deaths above average for the time of year.

Northern England has seen 23% more deaths than usual since mid-March, compared with 19% additional deaths in the South.

However, it is London which has seen the highest additional deaths – 39% more than usual.

This combined data does suggest that over the course of the crisis, the North has been impacted more than the South of England (outside London).

But it’s important to note that in both cases and hospitalisations, the whole of England is on an upwards trajectory.

Why is the North being affected more?

There is no single answer.

First, the increases which happened over the summer could be linked to the timing of the easing of restrictions in May.

At the time, the Mayor of Greater Manchester, Andy Burnham, described it as a “London-centric” approach, because many of the regions had not yet seen the decreases in deaths and cases experienced in the capital.

Second, there could be factors relating to demographics in northern England which have made people there particularly vulnerable to the virus.

Throughout the crisis, research from Public Health England (PHE) has highlighted that people living in deprived areas “have higher diagnosis rates and death rates than those living in less-deprived areas”.

Deprivation is linked to serious health conditions and other issues such as overcrowded housing.

On population density, people in south-western and eastern England are also more likely to live in rural areas or small rural towns. This also means they are less likely to live in overcrowded housing, reducing the spread between households.

According to the 2011 Census, 35% of southerners (excluding London) lived in these areas, compared with 26% in the Midlands and 19% in the North.

Unsurprisingly, almost all Londoners fit within urban areas, which could help explain the surge in cases experienced at the beginning of the crisis.

The case of London makes it difficult to simply call it a North-South divide, according to Richard Harris, a professor in social geography at the University of Bristol.

“It is not a North-South divide but an urban-lower-income v others divide, with those in lower-income jobs more exposed to the disease than those that are more easily able to adapt to home working and other means of isolation,” he says.

The ability to work from home, however, separates London from northern England.

According to the Office for National Statistics (ONS), “jobs based in workplaces in London and the South-East are much more likely to be possible to do from home compared with the rest of the UK”.

They say this is probably because of a higher proportion of people working in professional occupations in the region.

Data from Google Mobility, which tracks the locations people are visiting, suggests London has seen fewer people returning to workplaces than the rest of the country.

What claims do you want BBC Reality Check to investigate? Get in touch