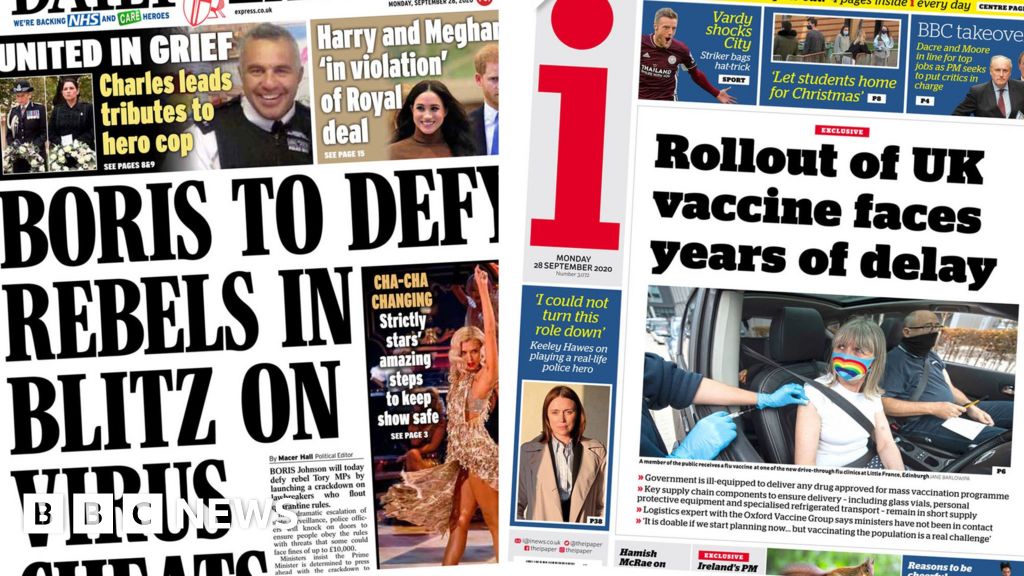 A number of papers lead with the strict new coronavirus self-isolation rules which take effect in England today.

The Daily Mail says people ordered to quarantine face a “knock on the door” from police, while the Daily Telegraph reports that neighbours are being encouraged by the government to report people who break quarantine.

The Telegraph suggests lockdown measures are causing increasing fatigue and reports that up to 100 Conservatives MPs are ready to back a rebel amendment which would force ministers to give the Commons a vote on future measures.

The Mail agrees the backbench revolt is growing, but the Express reckons that Boris Johnson is determined to press ahead with the crackdown and will face down Tory rebels.

According to the Times, ministers are preparing to enforce a total social lockdown across much of northern England and potentially London to combat a second wave of Covid-19.

Households would also be barred from meeting each other anywhere indoors.

The Times reports that the measures were among options presented to Mr Johnson and senior ministers before the latest restrictions were announced – but there was fear of a backlash.

A senior government source is quoted as saying: “The nation and party weren’t ready for us to go any further last week. Tougher measures will have to come though.”

There is plenty of sympathy for the more than 3,000 university students now locked down in their halls of residence in England and Scotland following outbreaks of the virus.

The Daily Mirror thinks threatening to keep students on campuses over Christmas is “foolish posturing” and probably impossible to enforce; instead, there’s a good case for reducing tuition fees for online learning.

The Telegraph and the Mail agree that pressure is mounting for such a refund.

But the Sun argues that if the number of deaths are on the rise in December, it would be “madness” to allow students to “yoyo up and down the country” visiting parents and grandparents.
The i newspaper suggests that the mass rollout of a Covid-19 vaccine in the UK could be delayed for two years.

It says ministers have failed to get to grips with the supply chain requirements needed to ensure everyone can be immunised.

Key components said to be in short supply include medical-grade glass vials to store the vaccine, refrigerated lorries and aircraft to transport it, personal protective equipment and even pallets to pack it.

The government says it has secured early access to 340 million doses when an effective vaccine is developed.

Sign up for a morning briefing direct to your inbox

There’s more optimism about the prospect of a trade deal between the UK and the European Union.

The Financial Times says the negotiations are in a race against time – with the transition period ending on 1 January.

It quotes a British official as saying Boris Johnson “very much wants a deal, but not at any price”.

The Mail suggests that both sides are giving ground to avoids the economic blow that a no-deal outcome would inflict on top of the pandemic – and the Sun reports that Brussels is offering an olive branch on the issue of state aid and and tax breaks for Northern Ireland.

Meanwhile, the Guardian reports that Mr Johnson, the French President Emmanuel Macron and Germany’s Chancellor Angela Merkel are among more than 60 leaders from five continents who have pledged to clamp down on pollution, to embrace sustainable economic development, and to eliminate the dumping of plastic waste in oceans by the middle of the century.

The paper says the move – which will be announced later at the UN in New York – is being billed as “meaningful action” to halt the destruction of nature.

However, President Trump and his counterparts in China and Brazil, Xi Jinping and Jair Bolsonaro, have not signed up.

The Sun leads with a report that the Duke and Duchess of Sussex have agreed to be filmed for a fly-on-the-wall reality series.

The paper says it had been thought that their £112m deal with Netflix would involve them working only behind the camera – but a source is quoted as saying Meghan wants people to see the “real her” and to offer a glimpse into the couple’s lives.

The Sun notes that they moved to California after complaining about media intrusion. It bills the forthcoming show: “The Only Way Is Sussex”.

And in tennis, Andy Murray won only six games as he crashed out of the French Open in the first round yesterday.

The Telegraph observes that he was wearing tights – and that a number of players complained about the wintry weather in Paris.

Normally, the tournament takes place in late May and early June.

But it’s been rescheduled because of the pandemic. The paper reports that the former world number one, Victoria Azarenka, refused to wait on court for conditions to improve.

She walked off, telling officials: “I’m not sitting here, I’m going to get frozen. I live in Florida.”