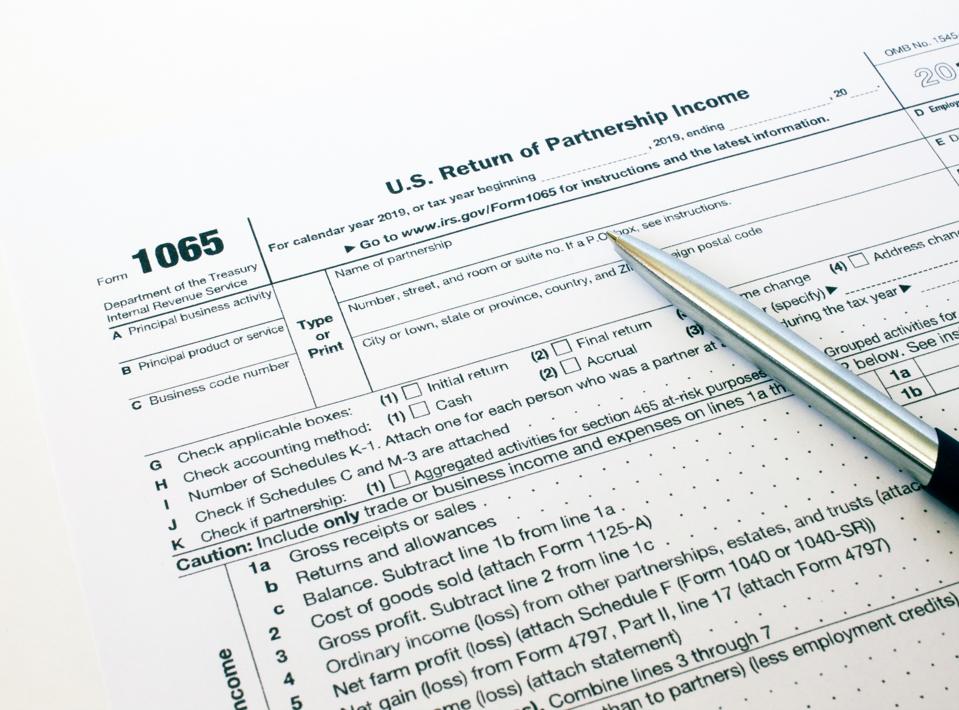 The IRS put something exciting on Page 30 of the draft 2020 Instructions for Form 1065. I am going to try to explain why this is important to anybody other than the few thousand people who take this stuff seriously. In 2017 there were 3.9 million partnership returns filed. Based on anecdotal evidence, a large proportion of them are wrong in one way or another and almost nobody, including the IRS, has cared until now.

Here is the big exciting change.

If you actually have to prepare returns I will refer you to Reilly’s Seventh Law of Tax Planning – Read The Instructions. It happens though that Ed Zollars on Current Federal Tax Developments has your back with Draft 2020 Form 1065 Instructions Contain Details of Tax Basis Partners’ Capital Account Reporting Requirements.

This piece is more directed at the big picture rather than my brother and sister partnership geeks.

What Are We Talking About?

We probably need to have a bit of a definitional discussion here. “Partnership” and “partner” have a variety of meanings in different contexts. Here is the tax meaning from Partnership Returns, Tax Year 2017 in the Fall 2019 SOI (Statistics of Income) Bulletin.

A partnership is the relationship between two or more persons who join to carry on a trade or business. Each person contributes money, property, labor, or skill with the expectation of sharing in the profits and losses of the business, regardless of whether a formal partnership agreement was made.

2.7 million of the 3.9 million partnership returns (69%) in 2017 were filed by limited liability companies. So most partnerships for tax purposes are not partnerships under state law. It used to be hard for an entity with limits to liability to achieve partnership classification, but the IRS threw in the towel on that in the mid-nineties, which is why LLCs are so popular. Not all LLCs are taxed as partnerships. Some elect corporation status and some only have only one member.

People will sometimes try to avoid partnership status by calling their relationship a joint venture or something like that, but the determining factor is the nature of the relationship. More than one person or entity carrying on business and dividing profits without forming a corporation.

So when I write partnership from here on, I mean an entity that is treated as a partnership for federal income tax purposes regardless of what it might be under state law or what the parties choose to call it.

Why Are Partnerships Return So Hard?

A partnership is considered to be a “taxpayer” even though it will generally not be paying federal income tax. It should have an ID number. It will have its own accounting method and make its own tax elections. The partners can conceivably have transactions with the partnership which will be treated as arms length.

When it gets down to the brass tacks of actually paying taxes, everything the partnership did will be allocated among the partners. How those allocation were done is one of the things that led to lots of shenanigans.

There was a major crackdown on the shenanigans in 1985 with regulations that were issued parsing out Code Section 704(b). Allocations had to have substantial economic effect or if supported by nonrecourse debt deemed economic effect. The regulations indicated that the best way to comply with that requirement was to maintain capital accounts that reflected economic reality and have distributions in liquidation be in accordance with those capital accounts.

As the partnership disposed of assets or depreciated them, the difference between book income and taxable income had to be allocated among the partners to account for those differences.

It Is A Mess

A lot of practical accountants liked doing things income tax basis and having capital accounts that tracked basis. When asked about the capital accounts that were supposed to be maintained according to the principles laid down in the partnership agreement, they might say that somebody else must be keeping those.

Ultimately though, the tax allocations would end up being wrong, if you didn’t pay attention to the partnership agreement. The national firm I worked for near the end of my career had a team that would “deploy” to large partnerships (I think oil and gas was big) to clean up allocations. The young manager who ran it was one of the few people that I could have an intelligent conversation with about 704(b).

Overall, it appears that the IRS did not really care about any of this, which is a little demoralizing. The evidence for the IRS lack of interest is of the “dog not barking” sort. The concept of “minimum gain chargeback” is critical in how the regulations work. In the 35 years that the regulations have been in effect, “minimum gain chargeback” appears in just one Tax Court decision.

Partners don’t just recognize income from partnerships from the flow through of the partnership’s income. Partnership interests are generally capital assets, so income or loss may be recognized on disposition. But there is more.

Basis in a partnership interest is affected by the flow throughs (income is a plus and loss is a minus), distributions (a minus) and contributions (a plus). But there is even more.

And here is where the big hole is. You can have a negative capital account either from distribution or losses. But if that negative capital account is of an absolute value greater than your share of the partnership liabilities that would be a sign that you should either have recognized gain or suspended losses. Or possibly even more likely whoever did the allocations of income and loss did not pay attention to the minimum-gain chargeback provision in the partnership agreement.

But that is true only if your capital account is equal to your basis excluding your share of the liabilities. But until now, the capital account could be reflected in several other ways. Now the IRS is requiring everybody to use pretty much the same method. That is a sign to me that they are going to start paying attention.

The Voice In The Wilderness

Jerry Curnutt has been a voice crying out in the wilderness since 2000 when he retired from IRS as a GS 14. He believes that there are vast amounts of unrecognized partnership gain getting by the IRS. Partnerships with large negative capital just wink out from the IRS Business Master File. If you think like an accountant, you expect there to be a final return where everything goes to zero, which arguably would require gain recognition.

Jerry recently wrote in a letter to Tax Notes:

“IRS enforcement has the software required to produce listings of the negative tax capital accounts that exit the IRS Business Master File without an offsetting income event (the “unaccounted-for tax gains”) by partnerships/ limited liability companies for any tax year, and also for any dollar range it chooses ($25 million or greater, $50 million or greater, $100 million or greater, etc.). It could then track these properties to their next destinations to determine if, and to what extent, the partnership minimum gains were reported as taxable income. To date, the IRS has declined to deploy this top-down capability” (Emphasis added)

There are a variety of ways in which a partnership can dissolve without there being gain recognition, but you would think that if tens of millions of deficit capital go poof it might be worth taking a look.

Here is a hypothetical example. A group of real estate investors buy a building on very favorable terms and improve its profitability substantially. Rather than cashing in by selling, they borrow on a nonrecourse basis a very large percentage of the buildings value and withdraw that money from the partnership giving them large deficit capital accounts.

Then there are issues and it is hard to make the mortgage payments. So they hand the keys to the bank and dissolve the partnership. There should be a big gain to bring their deficit capital accounts to zero on the final partnership return. Accountants who believe in the big balance sheet in the sky will eagerly await the K-1 that will balance everything with a gain.

The principals on the other hand are not so eager to get that last K-1. They didn’t get anything when the partnership dissolved. They no longer own an interest in their cherished overleveraged building. As far as they are concerned they had a loss in that final year.

Once you learn to think in double entry, it becomes hard to understand that most people don’t think in double entry. The partners got money without recognizing income. That was great. Now they let go of the partnership interest. That is sad. And you are going to tell them they have to pay taxes when they just lost something? That’s ridiculous. Who needs a final return?

And the partnership is dissolved, so who is responsible for filing that final return? More to the point is the IRS going to come looking for it? If Jerry is right, they won’t, because they are not using the algorithm that would highlight these sorts of shenanigans.

Maybe This Is It

A problem with Jerry’s algorithm is that the deficit capital account, which was a key number in it was actually kind of random. It could be computed so many different ways that it didn’t really mean anything. Individual return preparers wanted it to be the basis, but it often was not.

This effort by IRS to get consistency in the number is a sign that they are going to do something with it.

The 704(b) regulations were put into place mainly to combat tax shelter abuse. They were quickly followed by the Tax Reform Act of 1986 which introduced the passive activity loss rules. You will find a lot of Tax Court decisions about the PAL rules.

The effect of the 704(b) regulations was mainly a fairly substantial white collar jobs program. Partnership agreements were written to comply with the regulations. Many accountants struggled to see that they were followed and many more or less ignored them.

After a while it became clear that the language used to comply with the regulations sometimes distorted the economic deal, so a new approach was used. Very detailed provisions about distributions are included in the partnership agreements and there is a direction to make the capital accounts come out to those numbers. It is a little disturbing, because it means that the allocations are essentially a plug.

Compliance with the regulations was taken very seriously in some circles and a good amount of brain power went into the effort. That it seems that the IRS was not paying any attention is a little discouraging.

It was a substantial white collar jobs program and since I had one of the jobs, I am not complaining. My parents grew up in the Great Depression. When I was a kid and an old timer saw somebody doing a task that seemed pointless they would remark “Well at least it gives people work”.

Here are some related posts on partnership issues.

Who Is IRS Aiming At In Recent Partnership Notice?

Partnership Tax Returns – Why Do We Even Bother?

Even if capital accounts are maintained on a tax basis, they still may not equal a partners basis, due to transactions that take place outside the partnership.

6 Tax Planning Moves To Make Now
Ether, XRP and other ‘altcoins’ rally as bitcoin heads for all-time high
UK sport set for government rescue package
What A Biden Administration Means For Rental Housing Challenges
Here’s what you need to know for your 2020 taxes when reporting virtual currency to the IRS