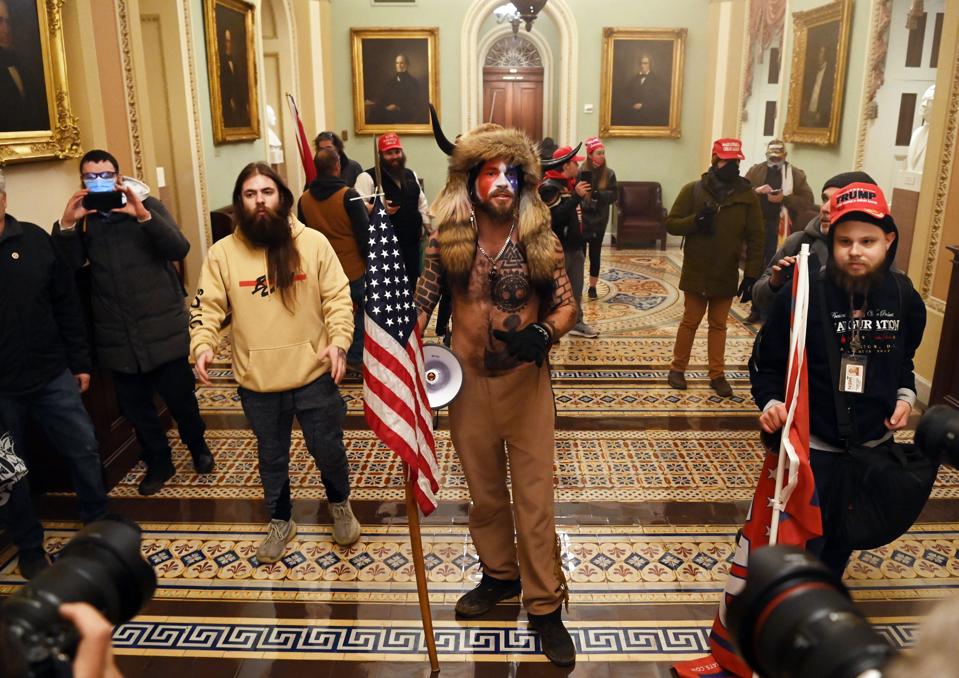 Democratic members of the House Ways and Means Committee led by Richard Neal are urging Treasury Secretary Mnuchin to issue emergency guidance to not-for-profit organizations letting them know that insurrection is not a valid exempt purpose, because. like smoking marijuana. it is illegal.

The letter is inspired by news reports. It refers to this piece by Laura Strickler and Lisa Cavazuti – Republican AGs group sent robocalls urging march to the Capitol.

The calls, which did not advocate violence or suggest the building should be breached, was sent out by the Rule of Law Defense Fund, a fundraising arm of the Republican Attorneys General Association. The groups share funding, staff and office space in Washington, D.C.

The letter also gives a broken link which was likely meant to point to Pro-Trump dark money groups organized the rally that led to deadly Capitol Hill riot by Brian Schwartz.

The letter refers to Revenue Ruling 75-384. I don’t have to tell you that the number means it was issued in 1975, but you need to consider the other readers. The ruling was directed at an organization working to encourage world peace. Let’s call them All We Are Saying (AWAS).

The purposes of the organization are to educate and inform the public on the principles of pacificism and nonviolent action including civil disobedience. Its primary activity is the sponsoring of protest demonstrations and nonviolent action projects in opposition to war and preparations for war.

So far so good. Maybe somebody might argue that discouraging people from taking up arms in defense of the United States is contrary to public policy, but I don’t think that would go too far.

Protest demonstrations are conducted at military establishments, Federal agencies, and industrial companies involved with military and defense operations. Other activities consist of peace marches and protests against the use of tax monies for war purposes. The protest demonstrations constitute the primary activity of the organization.

That is still probably OK. We have a right to assemble and all. Here is where things go bad.

To derive the maximum publicity of an event, demonstrators are urged to commit acts of civil disobedience. Participants deliberately block vehicular or pedestrian traffic, disrupt the work of government, and prevent the movement of supplies. These activities are violations of local ordinances and breaches of public order.

One of my relatives of blessed memory, who had been active in SDS, told me that another goal of this sort of thing was to radicalize the more tepid. Regardless it is illegal activity and illegal is illegal.

As a matter of trust law, one of the main sources of the general law of charity, no trust can be created for a purpose which is illegal.

In this case the organization induces or encourages the commission of criminal acts by planning and sponsoring such events. The intentional nature of this encouragement precludes the possibility that the organization might unfairly fail to qualify for exemption due to an isolated or inadvertent violation of a regulatory statute. Its activities demonstrate an illegal purpose which is inconsistent with charitable ends.

The 1975 ruling was most recently in the tax news because of IRS refusal to grant exempt status to organization involved with marijuana as you can see from this article by Ellen P. Aprill.

One Of These Things Is Not Like The Other

I doubt that the IRS has much of a role to play here. The difference is that AWAS was actively and openly encouraging illegal acts. Based on the media reports that is not what was going on with the 501(c)(4)s. In the internal guidance that was prepared in conjunction with the revenue ruling, GCM 36153, the author notes

The guidance that Chairman Neal requests sounds a bit absurd

The guidance should clarify what specific actions and conduct are not permissible by a tax-exempt organization in support of an attack on the Capitol or any Federal or state persons or buildings.

A similar letter from Ron Wyden of the Senate Finance Committee is more sensible. It cites GCM 34631, which was issued in 1971 and concerned an organization that engaged in picketing. The memo covers a lot of ground, but the part that is relevant here is this:

3. If it could be established that an organization seeking exemption under section 501(c)(3) of the Code engaged, to any significant extent, in violence and terrorism to accomplish its goals and/or the goals of those who found and control it, is that a sufficient basis for denial of exemption?

The discussion in question one concerning illegal activities explains our position on this matter. If an organization carries on substantial illegal activities, it cannot qualify for exemption under section 501(c)(3) of the Code. To determine when disqualifying activities are present to a “significant extent” (that is, when they become “substantial” , more must be considered than the ratio they bear to activities in furtherance of exempt purposes. The quality of such acts are as important as their quantity. A great many violations of local pollution regulations relating to a sizable percentage of an organization’s operations would be required to disqualify it from 501(c)(3) exemption. Yet, if only.01% of its activities were directed to robbing banks, it would not be exempt. This is an example of an act having a substantial non-exempt quality, while lacking substantiality of amount. A very little planned violence or terrorism would constitute “substantial” activities not in furtherance of exempt purposes.

Senator Wyden urges IRS in coordination with other law enforcement agencies to investigate the extent to which tax exempt organization were involved in the insurrection. I suspect that that is already going on. When federal law enforcement goes all hands on deck, IRS CI is usually in the mix. After all, that’s how they got Al Capone.