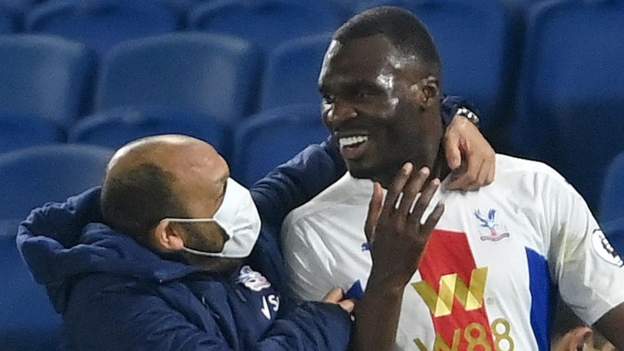 Christian Benteke’s stoppage-time goal gave Crystal Palace a smash-and-grab Premier League win at rivals Brighton, who are now in danger of being drawn into a relegation battle.

The visitors had opened the scoring against the run of play, with Jean-Philippe Mateta backheeling Jordan Ayew’s cross in from their first attack of the game.

But Brighton’s dominance in possession though was rewarded with an equaliser after the break when Joel Veltman swept a left-foot effort into the bottom-right corner.

The hosts spurned several excellent chances to go ahead before Benteke superbly volleyed in the winner against the run of play in the final minute of added time.

It proved to be a remarkable conclusion to the contest with Brighton enjoying 75% of the ball, registering 25 shots on goal to Palace’s three and forcing 13 corners while conceding none.

The result sees Palace move up a place to 13th but the Seagulls remain 16th, just four points above a resurgent Fulham in 18th.

Having come into this fixture on the back of a six-game unbeaten run Brighton fans could have been forgiven for looking at the second half of the season with optimism.

However, they will now be concerned at the prospect of their side being dragged into a fight for top-flight survival over the coming months.

While Graham Potter’s side play adventurous and easy-on-the-eye football, their ability to score goals has undoubtedly contributed to their current predicament.

Ten days after frustratingly failing to convert any of their 26 shots on goal against Aston Villa, they at least went one better this time around courtesy of their Dutch international defender Veltman.

But Potter will desperately hope that his forward players can now step up and provide the firepower that they will need to edge to safety.

The likes of top scorer Neal Maupay, who has scored just three goals in his last 19 Premier League appearances, endured another difficult evening, while Danny Welbeck, Lewis Dunk, Pascal Gross and Adam Lallana were all wasteful when presented with good opportunities.

For Sale In Brooklyn Heights: 5-Story Modern Townhouse Behind Historic Façade
25 highest-paid hedge fund managers made $32 billion in 2020, a record
Robinhood offers blistering retort to ‘elitist’ criticisms from Munger
Changes Must Come To Social Security
What Are Capital Gains Taxes For The State Of California?