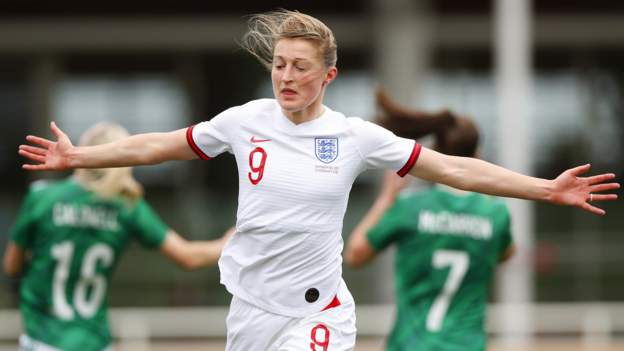 In a friendly played at England’s St George’s Park training base, Norwegian Riise, overseeing the Lionesses squad until Sarina Wiegman takes charge after the summer Olympics, saw her side overwhelm the visitors in blustery conditions.

White’s superb treble, a Lucy Bronze tap-in, Rachel Daly’s close-range finish and an Ella Toone penalty made for a resounding win in England’s first game in almost 12 months and first since the departure of manager Phil Neville.

And midfielder Jill Scott put in a commanding performance to mark her 150th England appearance, becoming only the second women’s player to reach that tally after Fara Williams.

Kenny Shiels’ depleted Northern Ireland failed to register a shot of any description but will now focus on the more pressing task of qualification for next year’s Euros, when they play in April’s play-off.

They had Becky Flaherty to thank for keeping the scoreline down, with the Sheffield United keeper making a string of superb saves, but the result reflected the 43 places between the sides in the world rankings.

Riise gets her attacking desire

Brought into the plug the gap between Neville and his successor Wiegman – who will take the reins after leading her native Netherlands at the Olympics – Riise had spoken of trying to bring attacking intent to this England team. They had stuttered to just three wins from Neville’s final nine games in charge before a long period without matches as a result of the coronavirus pandemic.

And the Norway legend got precisely what she asked for, with the Lionesses moving the ball quickly from the back to create a flurry of opportunities.

White was the main beneficiary, moving on to 39 international goals, first by capitalising after being gifted the ball by the Northern Irish defence, nodding in Bronze’s cross and then finishing a pass from Scott, who was given the captain’s armband on her landmark 150th cap.

Bronze, the Fifa Best Women’s Player of 2020, had tapped in Lauren Hemp’s low cross before half-time and later rolled the ball across for Daly to bundle in, before debutant Toone scored from the spot after Rachel Holloway brought down Chloe Kelly.

England, who were also able to bring on Sandy MacIver, Ebony Salmon and Carlotte Wubben-Moy for debuts, have one more friendly, against Canada in April, before a Great Britain team will head to Japan for the Olympics, although the Football Association is yet to name who will manage the team in Tokyo.

Riise could well be on the coaching staff when it comes to selecting the Team GB squad, although few of the Northern Ireland team would have made a convincing argument for inclusion based on this game alone.

This result should not detract from the impressive progress Shiels’ side have made, winning all four of their final group qualifiers at the end of last year to raise the prospect of reaching the European Championship.

Northern Ireland women will go to their first-ever major tournament if they can win April’s two-legged play-off, against an as yet unknown opponent, but they will need a stronger performance and a more experienced squad to give themselves the best chance possible.

Northern Ireland arrived at St George’s Park with a large swathe of their squad unavailable through injuries and work commitments, with sisters Kirsty and Caitlin McGuinness, first-choice keeper Jackie Burns and midfielder Demi Vance all missing out.

That meant there was a spot for 16-year-old Ella Haughey on the bench along with Holloway’s first start at left-back and, while Burns’ replacement Flaherty impressed between the sticks, the visitors hardly laid a glove on England, barely getting into the home side’s half.

There were snippets of Shiels’ continued desire to see his side play out from the back, but it frequently led to gifting the ball to England and ultimately led to a thumping defeat.

‘We showed character’ – what they said

England interim manager Hege Riise, speaking to BBC Sport: “Obviously [I’m pleased with] six goals, four players getting their first cap and that we pushed for 90 minutes and wanted more goals. We tried to find the pockets in between, run at them and I think we showed character.

“We probably could’ve scored more goals but the performance and energy that we put into the game was good.”

On goalscorer Ellen White: “She’s a leader and she always wants to score goals. She’s always looking for runs into the box. Three goals and great goals.”

Jill Scott, who won her 150th England cap, speaking to BBC Sport: “The game was really enjoyable. Really happy for Ella Toone and the other girls who made their debuts, so it’s been a great day all round.

“Massive thanks to Steph [Houghton] for letting me have the captain’s armband today. She’s made so much effort to make sure it was a special day for me.

“I’ve been overwhelmed by all the messages, I was just trying to concentrate on the game but now I can finally relax. Everything I do is to just make my family proud but I don’t think this has sunk in yet.”

Video shows Perseverance rover’s dramatic Mars landing
What To Do When An Aging Parent Takes In A Homeless Friend
What Are Capital Gains Taxes For The State Of California?
Elon Musk says SpaceX ‘will double’ Starlink satellite internet speeds later this year
Salesforce revenue up 20% from last year, forecast calls for similar growth rate